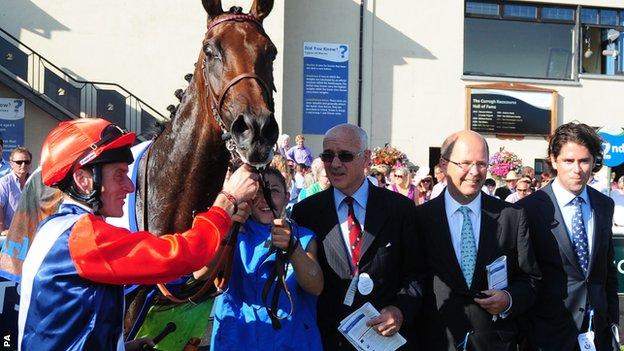 French challenger Chicquita survived a stewards' inquiry to win the Irish Oaks with her maiden victory.

The 9-2 shot, trained by Alain de Royer-Dupre and ridden by Johnny Murtagh, produced a late burst to edge out Venus De Milo and Just Pretending.

It is the sixth time Murtagh, 43, has won the Group One at the Curragh.

Lady Cecil was hoping for a first Classic winner since the death of her husband Sir Henry Cecil with Riposte, but the 9-4 favourite finished fifth.

Epsom Oaks winner Talent was last of the seven runners in a high-quality field.

Chicquita, competing in her fourth race, had previously only run in France, earning a second and a third in her three outings.

"She had never won before this race, but I knew she was a top filly," said De Royer-Dupre.