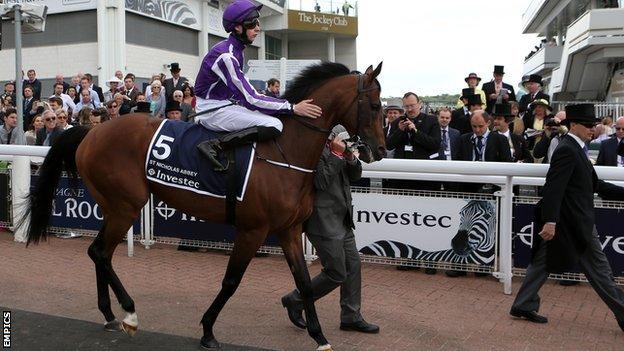 Triple Coronation Cup winner St Nicholas Abbey has had a "major setback" in his recovery following a life-saving operation.

The six-year-old was in intensive care following surgery for a leg fracture he suffered during a gallop at the Ballydoyle base of champion Irish trainer Aidan O'Brien.

"St Nicholas Abbey had a major setback in his recovery, suffering from a bad colic," tweeted owners Coolmore.

"He had emergency surgery on Friday."

It added: "The prognosis is very guarded at the moment."

It was hoped he would recover from the injury and go on to have a breeding career as a stallion at stud.

St Nicholas Abbey, who was winter favourite for the 2010 Derby at Epsom but did not run in the race, has been one of Flat racing's stars of recent years.

The son of top stallion Montjeu recovered from a disappointing sixth in the 2000 Guineas at Newmarket three years ago to land some notable prizes.

He won six Group One races - including at the age of two, four, five and six - and earned close to £5m in career prize money. In total, he won nine of his 21 races.

On Derby Day at Epsom in June last month, St Nicholas Abbey made history as the first horse to win the Coronation Cup three times, having previously taken the race in 2011 and 2012.