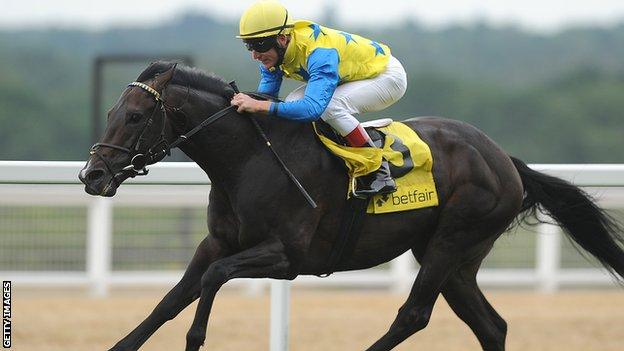 The 13-2 shot, ridden by Johnny Murtagh, came in clear of Trading Leather and Hillstar, with favourite Cirrus Des Aigles finishing in fourth.

The four-year-old passed the winning post five lengths clear of the field.

Murtagh claimed the fourth King George victory of his career in a new course record time of 2 minutes 24.60 seconds.

Two seconds were taken off the previous best, set by Harbinger in 2010.

Ektihaam and Universal set a fierce early pace, with Trading Leather always in contention, but the German-trained Novellist raced into the lead entering the straight.

Cirrus Des Aigles had too much work to do and made no impression as Novellist followed up last month's win in the Grand Prix de Saint-Cloud to give trainer Andreas Wohler his first Group One win in England.

"I used to come to Ascot to watch the King George as a kid on my holidays, now I'm here winning it," Wohler said.

"One of our strengths is we have horses who mature later and when stepped up in distance. I was confident as I knew he had improved since his last race but I didn't expect him to win by five lengths."

Wohler added that Novellist's next target would be the Prix de l'Arc de Triomphe on 6 October.

"The main race would be the Arc after this, and he will have a prep race in advance, either in the Prix Foy or more likely the Grosser Preis von Baden."