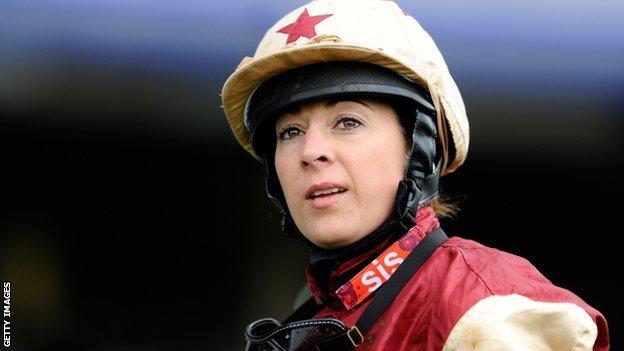 Britain's leading female jockey Hayley Turner faces a lengthy spell out after breaking her ankle in a fall at Yarmouth.

Turner fell from the John Jenkins-trained Rambo Will following a six-furlong handicap in which the pair finished third.

The 30-year-old rider, who is an ambassador for next week's Glorious Goodwood meeting, will see a specialist on Friday to assess the severity of the break.

She injured the same ankle in a fall at Bath two years ago and was out of action for almost four months.

In March 2009, she was sidelined for four months after being knocked unconscious on the Newmarket gallops when her horse broke a leg in a stalls accident.

Turner split from her employer Michael Bell last month after 13 years with the Newmarket trainer and has been riding as a freelance.

She is the only British female jockey to have won a Group One race outright - succeeding twice in 2011, on Margot Did in the Nunthorpe Stakes at York, and Newmarket's July Cup on Dream Ahead.