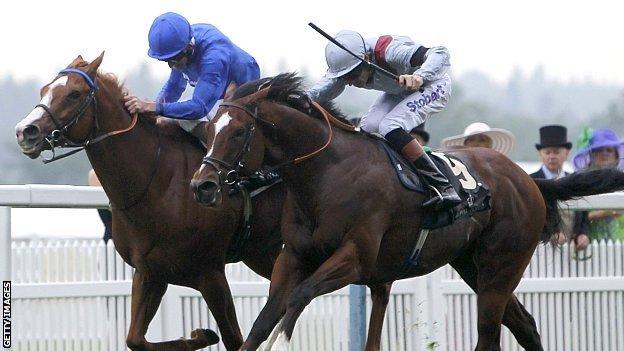 Toronado (11-4) struck back after two previous defeats by Dawn Approach as he prevailed in the Sussex Stakes in the "Duel on the Downs" at Goodwood.

The Richard Hannon-trained three-year-old, under Richard Hughes, made up four lengths in the last furlong to beat the 10-11 favourite by half a length.

Dawn Approach had previously beaten his rival in the 2,000 Guineas and St James's Palace Stakes at Royal Ascot.

Declaration of War, who won the Queen Anne Stakes at Ascot, was third at 7-2.

He had been tipped to upset expectations of a straight fight between Dawn Approach and Toronado, but failed to seriously threaten.

Winning jockey Hughes told BBC Sport: "The horse has earned it. I was privileged to be on his back just to point him in the right direction.

"He should have probably won a little more than he has done up until now.

"Dawn Approach ran another fabulous race, but you don't always get the good runs and that is probably the difference between the two horses on any day of the week."

Dawn Approach's had been followed by a far narrower victory when

Confidence among Toronado's connections that they might reverse those results, fuelled by a belief that their charge could have won at Ascot without a bump in the closing stages, did not seem to be shared by the Goodwood crowd who had backed Dawn Approach down to odds-on favouritism.

Stablemate Leitir Mor recovered from a slow start to set a fierce pace and, once Kevin Manning urged Dawn Approach into the lead, it seemed that trainer Jim Bolger's plans might come together.

But Hughes timed Toronado's run out wide to perfection and overhauled the favourite with enough time in hand to congratulate his ride before the finishing post.

The result is only Dawn Approach's second defeat after a miserable run at the Derby, when he went off as favourite but finished last.

Appleby, 38, was granted a licence last week to take control of the Moulton Paddocks stable at Newmarket that is part of the private stable of Dubai's ruling Al Maktoum family.

Moulton Paddocks was previously overseen by Mahmood Al Zarooni who was banned from racing for eight years in April for doping horses in his care.