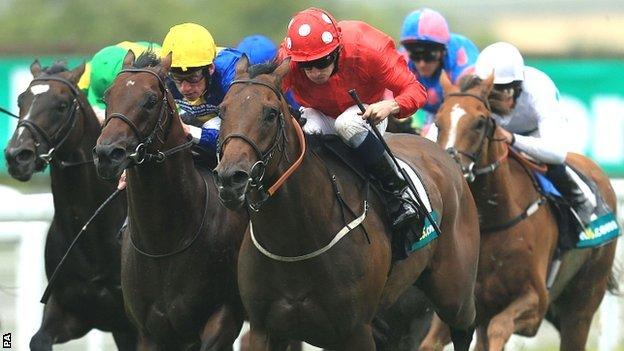 Garswood, the 9-4 favourite, clinched the Lennox Stakes on the first day of Glorious Goodwood, holding off Caspar Netscher in an exciting finish.

Ryan Moore guided the three-year-old home for Richard Fahey, who said Garswood may now be aimed at the Prix de la Foret at Longchamp in October.

Producer, ridden by champion jockey Richard Hughes, trailed home out of the places for Richard Hannon.

The Sussex Stakes, featuring Toronado and Dawn Approach, is on Wednesday.

The 2,000 Guineas winner Dawn Approach returned to form with victory over his rival but Toronado's connections are hopeful of success in the pair's third meeting.

The Lennox Stakes provided a thrilling finish in the opening day's feature race as Garswood repeated the form he showed in winning the Free Handicap at Newmarket in April.

He had failed to deliver on that promise since, with a seventh-place finish in the 2,000 Guineas and a fourth in the Jersey Stakes at Royal Ascot after a sluggish start.

But Moore's tactics - tucking in behind his rivals before coming through from out wide - proved shrewd as Garswood resisted the challenge of Caspar Netscher, making his first start in almost a year after an unsuccessful stint at stud.

Producer, a course and distance winner last season, failed to show in a disappointing run.