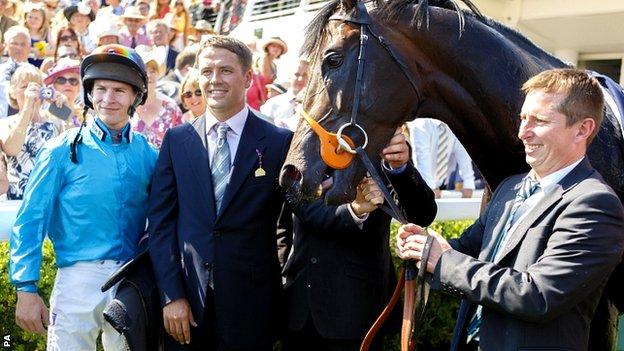 Brown Panther dominated the final two furlongs of the Goodwood Cup to give part-owner Michael Owen a victory he described as "a real honour".

Running over two miles for only the second time in his career, Brown Panther (13-2) won by three and a half lengths from Ahzeemah and Altano.

Richard Kingscote guided the five-year-old into a gap in the closing stages and left the field of 14 trailing.

With football you always feel you're in some sort of control, but this racing game is so tough on the nerves

Favourite Mount Athos tried to come from well back but never threatened.

Former England striker Owen said: "There is a lot of heritage in this race and it's a fabulous race to win. He's full of stamina. We didn't want it to be a dawdle and hence we were up there in the box seat, just in case there was no pace.

"The leader all the way (No Heretic) did us a favour and gave us a nice lead. He's galloped all the way to the line.

"It's a great training performance from Tom Dascombe and a great ride by Richard Kingscote.

"With football you always feel you're in some sort of control. You and your team-mates are in control, but this racing game is so tough on the nerves - you're powerless.

"You send your jockey out to ride and you hope your trainer has got him spot-on. I was a little bit excited."

Looking to the future, Owen added: "We thought about the Melbourne Cup last year and we were thinking about it again this year, prior to this race.

"As long as he didn't bomb out today we were thinking Irish St Leger and then Melbourne Cup, so, on that performance, I don't see why we should change our mind."

Kingscote said: "He was stepping up to two miles and I was really confident he'd love the track. It's brilliant. This is what it's about and it's great for everyone in the yard."

Dascombe added: "We probably haven't done as well as we should have done with him by now.

"I think the horse is helping us because he's maturing. We've taken our time and tried to pick races this year. We've tried to get him spot-on for each day and it seems to be working a bit better than it was.

"This was the plan, this was the target. Hopefully we'll move on if he's all right after this."