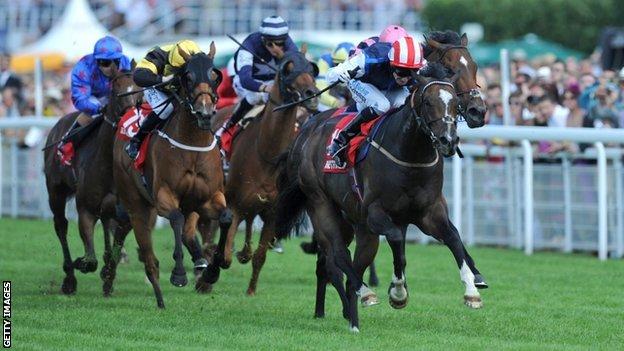 Wentworth ran out the 6-1 winner of the Betfred Mile at Glorious Goodwood for in-form jockey Richard Hughes and trainer Richard Hannon senior.

It sealed a double for the pair after Montiridge won the Thoroughbred Stakes.

Champion jockey Hughes was clocking up his sixth winner of the 2013 meeting, 25 years to the day since his first career victory.

Wentworth won by three-quarters of a length from 5-1 favourite Cape Peron, with Sandagiyr third, ahead of Galician.

Montiridge had given Hannon, who took out a licence in 1970, his 250th winner at Goodwood, and his 70th at the Glorious meeting.

Hughes was scoring 25 years on from his maiden triumph - with Viking Melody at Roscommon on 2 August, 1988.

Moviesta, who had been entered for the Stewards' Cup at Goodwood on Saturday, is likely to be aimed at the Nunthorpe Stakes at York on 23 August after his five-furlong Group Two victory on Friday.

"This is a real superstar of a horse, I told Harry that when he was a two-year-old," said Smart.

"He's in the Nunthorpe, but we'll let the horse do the talking. I don't want to wish my life away, but next year I think we'll have something on our hands."

Mulrennan plans to appeal against given a six-day riding ban issued by stewards who said he had allowed his mount to "drift continuously left without taking corrective action".

Redknapp owns the horse togethwe with football agent Will Salthouse and Richie Fiddes.