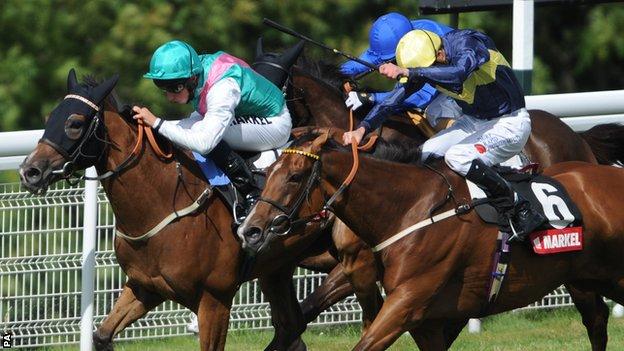 Winsili, a 20-1 outsider, was a surprise winner of the Nassau Stakes at Glorious Goodwood.

That's racing, she was very unlucky

There was a disappointing run from 7-4 favourite Sky Lantern, who was boxed in on the home straight as she struggled in her debut race beyond a mile.

The 12-1 shot surged clear of Ajjaadd and Burwaaz in the closing stages of the six-furlong dash.

"This means a lot," Rex Imperator's jockey Neil Callan told Channel 4 Racing. "He jumped smart, (trainer) William (Haggas) said to ride your own race, to sit on him, wait for that burst and use him late.

"He's quickened like the Group One horse I thought he was."

Sky Lantern jockey Richard Hughes lamented his luck in the Nassau Stakes as he was unable to add to the filly's previous 1,000 Guineas and Royal Ascot triumphs.

"I had a good run through all the way, then I got behind the Godolphin runner (Sajjhaa) at the two-pole, I went to go round her but Mr Buick's filly rolled in on her and pushed her back on her heels," he told Channel 4 Racing.

"That's racing, she was very unlucky."

Winning Winsili rider Buick said: "I got a nice run through and she was very game. It's been an up and down week so it's nice to finish on a high.

"I had plenty of room in the straight and she travelled so well. I decided to take my time as she has a nice turn of foot."