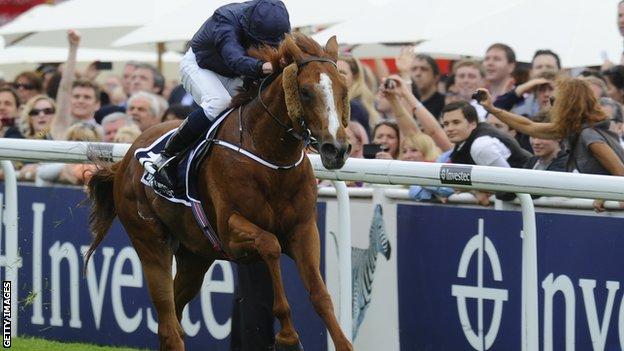 This year's English, Irish and French Derby winners are among entries for the Qipco Champion Stakes at Ascot.

Ruler Of The World,Trading Leather and Intello are contenders for the £1.3m race on 19 October.

Potential rivals in the mile-and-a-quarter contest include Al Kazeem and Cirrus des Aigles.

Toronado is another possible, although he looks set for a rematch with Dawn Approach in the Queen Elizabeth II Stakes on the same card.

Last year's 2,000 Guineas and Derby winner Camelot, who has disappointed this season, is among entries for trainer Aidan O'Brien, along with his Racing Post Trophy victor Kingsbarns.

Godolphin's Lockinge Stakes winner Farhh is entered, together with the Sir Michael Stoute pair of Hillstar and Telescope.

Entries for the Long Distance Cup include 2012 champion Rite Of Passage, together with Gold Cup winner Estimate, owned by The Queen, and Brown Panther, part-owned by former England striker Michael Owen.

Rod Street, chief executive of British Champions Series Limited, said: "We are absolutely delighted with the entries which numerically are 32 up on last year and contain nearly every top horse in Europe that would be suited to our race line-up.

"The big stories include the potential rematch between Toronado and Dawn Approach in the QE2 which would be a huge draw."