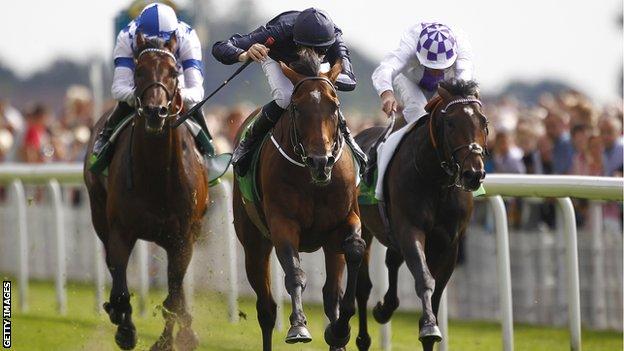 Declaration of War claimed a surprise win in the Juddmonte International Stakes at York.

The Aidan O'Brien-trained horse, ridden by his son Joseph, claimed victory ahead of second-placed Trading Leather with favourite Al Kazeem in third.

Trading Leather set the pace in the mile-and-a-quarter Group One race with Al Kazeem following.

But as they came into the straight, it was Declaration of War who took charge to win by a length and a quarter.

The Richard Hannon-trained Toronado was expected to be in contention in the feature race on the opening day of Yorkshire Ebor Festival but finished last of the six runners.

Three furlongs from home Richard Hughes was clearly struggling on Toronado and he was eventually eased to a walk.

Al Kazeem's run had brought him up alongside Jim Bolger's Trading Leather but the 11/8 favourite began to flatten out inside the final furlong.

Irish Derby winner Trading Leather, ridden by Kevin Manning, fought back to the line but the 7/1 priced Declaration of War held on.