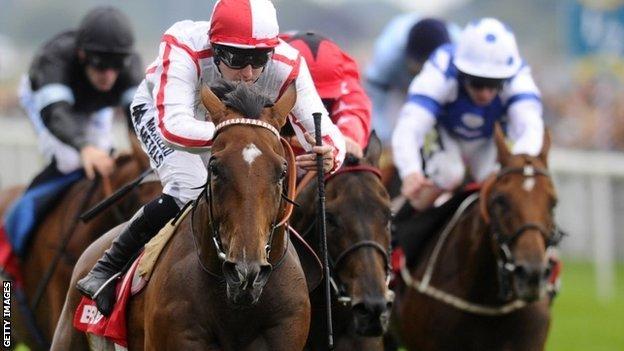 The well-fancied Tiger Cliff won the Ebor Handicap on the final day of the festival of the same name at York.

Tom Queally took advantage of gaps in front of him on the Lady Cecil-trained 5-1 shot, who has finished in the top two in all three of his races in 2013.

With a furlong to go, Tiger Cliff was among a number of horses in with a chance of victory before moving clear.

Heavy overnight rain meant only 14 of the 20 declared runners went to post for Europe's richest handicap.

There was drama as soon as the stalls opened as leading contender Opinion completely missed the start, but the sedate early gallop meant he soon made up the ground.

As the pace gradually increased, it was Genzy who looked the likely winner halfway up the straight, but other challengers from further back began to emerge.

And although Genzy galloped on strongly in the final furlong, it was Tiger Cliff who got up to win by half a length.

Queally said: "I wanted to angle to the stands' side as much as I could because it's a bit quicker there.

"He travelled well and we were happy to see the rain as he has the attributes of a horse that handles cut in the ground.

"He always finishes his races and he dug deep when it mattered. It's probably one of the hardest races of the year to win.

"It's good when a plan comes together. It's great for Henry Ponsonby [owner] and the team at home."