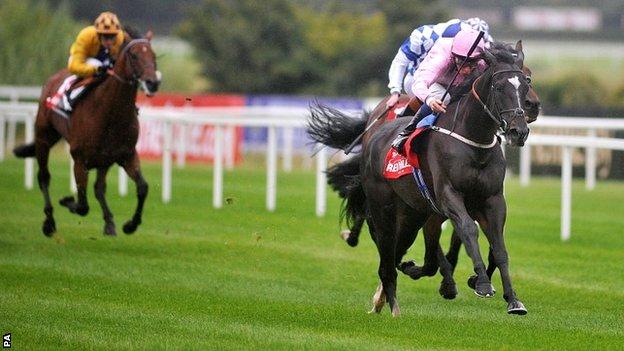 In a field of six, Lord Lloyd-Webber's four-year-old triumphed by a length and a quarter with Trading Leather, who had made most of the running, in third.

Declaration Of War withdrew because of the rain while Kingsbarns, in his first appearance of the year, pulled up.

It was a first Group One success in mixed company for The Fugue, who was beaten on two occasions by Al Kazeem this year, in the Prince of Wales's Stakes at Royal Ascot and the Coral-Eclipse at Sandown, but won the Group One Yorkshire Oaks at York last month.

Buick said: "She's one of the greats now. She's been so unlucky and should have won so many times last year. I'm just glad she's getting the rub of the green.

"She's always been special and has always been a special one for in the yard everybody. She's very good and has arguably beaten the best around at the moment."

Gosden is targeting the Prix de l'Arc de Triomphe next month and November's Breeders' Cup in the USA where she finished third last year.

"Sometimes you get fast ground for the Arc. When Sea The Stars won it was good ground but last year it was bottomless when we tried to run in the Prix de l'Opera," he said.

"We will take it a step at a time. We will look at the Breeders' Cup again."

Joseph O'Brien reported that Kingsbarns, who has not raced since winning the Racing Post Trophy at Doncaster in October last year, had lost his action but is hoping it is just a minor problem.

He said: "When he met the road, he took a bit of a bad step and lost his action. He wasn't too bad pulling up and hopefully he's just given himself a little bit of a bang."

Father and trainer Aidan O'Brien had earlier taken the decision to withdraw his other entry Declaration of War, who beat both Trading Leather and Al Kazeem to win the Juddmonte International Stakes at York last month.

Last year's runner-up, who was originally bought by his owners for 2,000 euros, went one better this time in the six-furlong contest to earn £141,000 for the victory.

Slade Power (9-1) was three lengths away in second, with 33-1 shot Hoof It, part-owned by golfer Lee Westwood, in third.