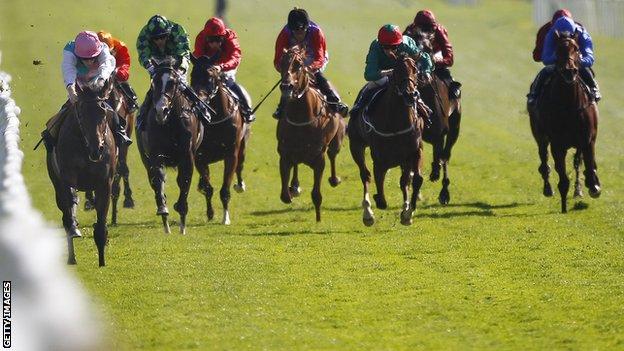 Most riders are unhappy about plans to have horse racing on Good Friday, says the chief executive of the Professional Jockeys' Association.

They are worried about losing a rare rest day and the effect on their awards night, Paul Struthers said.

The move - supported by top female rider Hayley Turner - could provide the sport with a windfall of more than £1m.

But the organiser of a Good Friday charity open day has called the proposal "greedy and selfish".

• Would give sport a commercial lift, with extra prize money, betting and racecourse revenue

• Could regenerate the all-weather programme, with a 'Champions Series' style schedule building to a Good Friday finale

• Racing on most other Bank Holidays attracts good crowds

• Annual Lesters awards, where jump and flat jockeys celebrate success, are held the night before

Several trainers and others within the industry have also voiced their backing for what they see as a unique chance to exploit a valuable commercial opportunity.

The British Horseracing Authority (BHA) has invited applications from racecourses to stage fixtures on Good Friday for the first time from next year.

While a final decision is not expected before 30 September, it is understood the governing body is minded to allow two fixtures on 18 April, 2014, provided they meet criteria around prize money and forecast attendances.

BHA chief executive Paul Bittar said his organisation was aware of the "historical sensitivities", but added that it was "a significant leisure day, so we are keen to fully assess the opportunity for racing".

Arena Racing, which owns Lingfield racecourse, has proposed a £1m championship meeting at the Surrey track on Good Friday.

It would form part of a wider revamp of the all-weather winter racing schedule, while Musselburgh in Scotland would also like to race.

But jockeys are concerned they will lose one of only four blank days in the racing calendar, and one which falls the day after their popular annual Lesters awards - the sport's equivalent of the Oscars named after legendary jockey Lester Piggott.

"A lot of other sports take place on Good Friday and I think racing is adopting a slightly old-school attitude.

"We are in the entertainment business and as jockeys we want to ride in front of bigger crowds, which is more likely to happen during weekends and holidays."

Trainer Charlie Brooks (Daily Telegraph): "There is no computer in the world that can quantify the long-term benefits of engaging with the next generation of racing fans at these open days.

"And fostering a love of the racehorse rather than bouncy castles, cheap beer and tribute bands is the right way forward."

"Most jockeys are unhappy about the idea. It would leave just three days off [23, 24 and 25 December]," said Struthers, whose organisation represents about 450 riders.

"They can choose not to ride, but a trainer or owner who wanted them is unlikely to have them again.

"If this goes through, a blank day elsewhere in the calendar is vital for the survival of the Lesters.

"Plans for more investment in all-weather racing are welcome, but the logic that there has to be a Good Friday finale does not stack up."

He said some jockeys, including Irish Catholics, were against the idea on religious grounds.

"It is going to be a huge dilemma for those who see it as a religious issue," said Struthers.

He said there were two "weak" Saturdays in late March/April where a big all-weather race day could be accommodated.

Struthers acknowledges some jockeys are in favour of another chance to showcase their talents - and Turner is one of them.

"I am a little surprised by the opposition to it, some of which has been very aggressive," Turner, who has just returned from being sidelined with a broken ankle, told Racing UK.

"Coming from a jockey, who has just spent five weeks on the sidelines, I relish the opportunity to be riding as much as I can, especially in the higher profile races."

At the racing centre of Lambourn in Berkshire, more than 30 trainers open their yards to the public on Good Friday with an estimated 10,000 people meeting horses and trainers. A similar event has been held for 20 years in Middleham, North Yorkshire.

Lambourn organising committee chairman Mark Smyly said his event - which was called off due to waterlogging this year - raised about £60,000 in 2012 for charity, much of which went to a housing project for working and retired stable staff.

"It is not just racing people who come to the open day. The PR for the sport is enormous and to do away with that is just greedy and selfish," said Smyly, who helped to run the first open day 23 years ago.

"It brings in a lot of new owners to the sport and there must be other days when they can have racing - why not make Easter Sunday a big day?"

An Arena Racing spokesman said they were aware of "some opposition" but declined to comment ahead of the BHA decision.