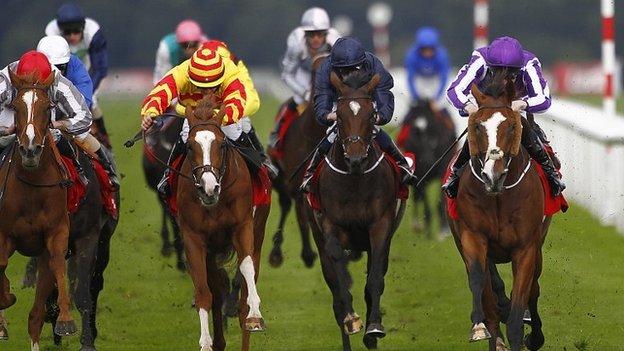 The 7-2 favourite was a length-and-a-quarter clear of Oaks winner Talent and twice Classic-placed Galileo Rock.

Cap O'Rushes, under Mickael Barzalona, made the running, but Leading Light was always handy and went for home early.

"He's quite lazy in his races - he wears cheekpieces - and I got him going plenty early," said O'Brien Jr.

"He jumped a bit slowly and I could see a couple of horses going forward. I knew we weren't going to go much of a gallop, so I gave mine a kick just to get up there.

"I knew if I didn't hit him until a furlong and a half out he would win."

Talent, who was bidding to become the first filly to land the St Leger since User Friendly in 1992, was involved in a barging match as she tried to make her move, but the Leading Light was clear by then.

Galileo Rock, whose trainer David Wachman only decided to run on the morning of the race because of concerns about the ground, finished three-quarters of a length behind Talent.

Aidan O'Brien said: "I keep saying it, but it's a privilege for us to be involved with the team [Coolmore].

"We really appreciate it, to have good horses to ride and train. It's a big team effort and we're a very small part of it."

Coolmore supremo John Magnier said: "We will look at the Arc now - he's got plenty of speed. We will talk about that.

"The ground in Paris is soft at the moment; that would rule Camelot out and perhaps open it up for him."