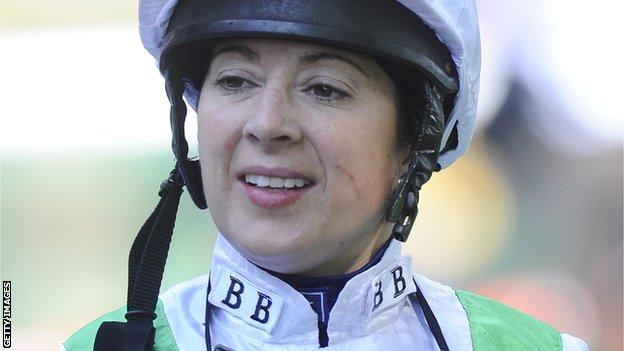 Britain's leading female jockey Hayley Turner has been released from hospital after suffering a heavy fall on Seal Of Approval at Doncaster.

The 30-year-old, who recently returned after breaking an ankle in July, was thrown to the ground when her mount clipped the heels of another horse.

She was kept in overnight and released on Friday after scans came back clear.

"She's now at home with her mum and is just battered and bruised," said Guy Jewell, Turner's agent.

"All the tests, CT scans and X-rays came back clear. It's just soft tissue damage."

The race was won by 15-8 favourite The Lark, trained by Turner's former employer Michael Bell.

In March 2009, Turner was sidelined for four months after being knocked unconscious on the Newmarket gallops when her horse broke a leg in a stalls accident.

Turner, who is the only British female jockey to have won a Group One race outright, split from Bell in June after 13 years with the Newmarket trainer and has been riding as a freelance.