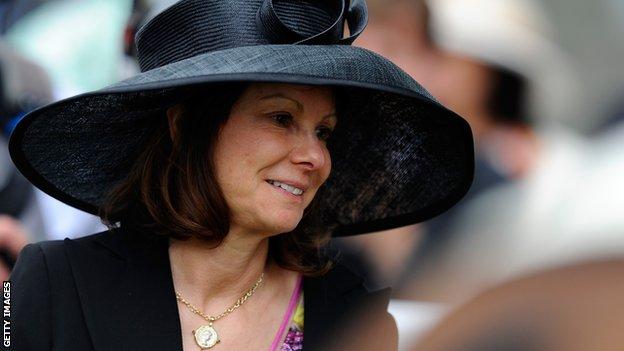 Lady Cecil will continue to train from Warren Place stables, the yard associated with her deceased husband and legendary trainer Sir Henry Cecil.

at which point Lady Cecil took over the licence on a temporary basis.

And her Newmarket stable has gone on to saddle 31 winners since.

Since the death of Sir Henry, Lady Cecil has saddled 31 winners from 131 runners at a strike-rate of 24%

"I have spoken to our owners and our staff and confirmed that it is my intention to carry on as trainer at Warren Place," she said.

"I have also talked to the British Horseracing Authority about plans to continue and have signed up to complete the training licence modules through the winter.

"We are lucky to be able to train from such a superb location as Warren Place. It is proven over the decades as a fabulous environment where horses can thrive. I am also fortunate that Henry built up such a strong team and in Mike Marshall I have an excellent assistant.

"The main aim is to make sure every horse sent here fulfils its potential and I would love to win a Group One so that we can once again raise the flag at Warren Place."

Most notable of Lady Cecil's wins was at Royal Ascot, the meeting where Sir Henry was the leading trainer with 75 successes.

And last month's Betfred Ebor at York was also a highlight, won by the Henry Ponsonby-owned Tiger Cliff.

"It was a great day when Tiger Cliff won the Ebor for us all and it's fingers crossed for the Cesarewitch [at Newmarket on 12 October]."