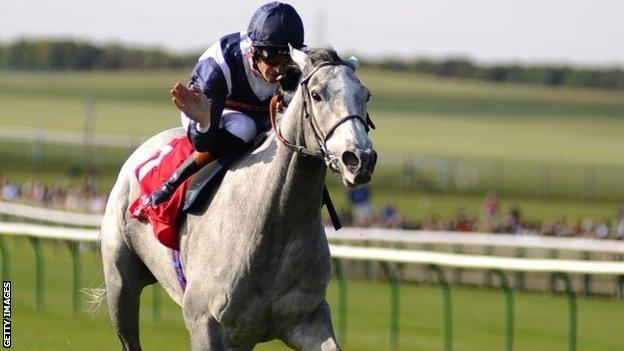 Sky Lantern claimed her fourth Group One win with victory in the Sun Chariot Stakes at Newmarket.

The 1,000 Guineas winner, ridden by Richard Hughes for Richard Hannon, won by a length from Integral.

Favourites won the opening four races, with Johnny Murtagh riding the Ismail Mohammed-trained Educate to victory in the Cambridgeshire Handicap.

Denying Code of Honor by a short head, it was the Irish jockey's seventh big-race winner of 2013 at the age of 43.

"I can't really believe it - you couldn't write it. I didn't have any ride in the Guineas, no ride in the Derby. I said to my wife going to Ascot, thank goodness we are training a few," said the jockey, who started training earlier in the year.

Trainer Hannon had unsuccessfully appealed against that result earlier in the year, saying the grey had been impeded by her rival.

There was no doubt this time as Elusive Kate and Guineas runner-up Just The Judge were left down the field, with Sky Lantern flashing past Integral with 100 yards to run.

Richard Hannon junior, the trainer's son and assistant, said: "The owner lives in Hong Kong and that is where he wants to go. Whether we look at something like the QEII at Ascot as well, we'll have to see."

Berkshire followed up victory in the Chesham Stakes at Royal Ascot with a hard-fought win in the opening Royal Lodge Stakes for Paul Cole.