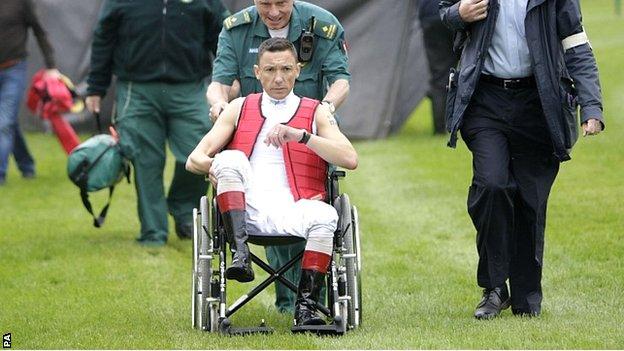 Frankie Dettori will miss the rest of the season after breaking his ankle in a fall at Nottingham on Wednesday.

The 42-year-old, who had been due to ride leading Prix de l'Arc de Triomphe contender Treve on Sunday, was unseated from his horse Eland Ally while heading to the start of the 15:00 BST race.

Initial on-course prognosis suggested he had suffered only soft-tissue damage but X-rays subsequently showed a break.

Dettori's spokesman Peter Burrell said: "Sunday is out - as is the season."

He added: "He was extremely disappointed on the phone and did not want to discuss it much more than that."

Treve was Frankie Dettori's big chance to get back into a high-profile winners' circle.

In a BBC interview, the three-time champion jockey acknowledged that, after a troubled year, the possibility of winning a fourth Arc on his 26th consecutive ride in the race was extra special.

His cocaine ban came on top of the unrelated loss of his job with Sheikh Mohammed's Godolphin stable. Recently, winners had proved harder than expected to come by. Having got a new job with Treve's owner, Sheikh Joaan Al Thani, a ride in the Arc with a good chance was just what Dettori yearned for.

However, with the Sheikh's ever-growing interests, there will no doubt be plenty more to come in the future.

The three-time champion jockey, who returned from a six-month ban at the end of May after testing positive for cocaine, will miss the Arc for the first time in 26 years.

Unbeaten Treve, rated about 4-1 second favourite behind Japanese market leader Orfevre (2-1), will now be ridden by Thierry Jarnet at Longchamp.

Jarnet rode the filly to victory on her first three races before she was sold to Dettori's new boss, Sheikh Joaan Al Thani, and has won the Arc twice (Subotica 1992, Carnegie 1994).

Trainer Criquette Head-Maarek said: "He [Jarnet] knows the filly very well and won the Prix de Diane (French Oaks at Chantilly) on her in June.

"It is bad luck for Frankie, but that is life in racing."

In September, Dettori secured his first Group One winner since returning from his drugs ban when riding Treve to victory in the Qatar Prix Vermeille, also at Longchamp.

Dettori had been banned from racing for six months last December after testing positive for cocaine at Longchamp last year.