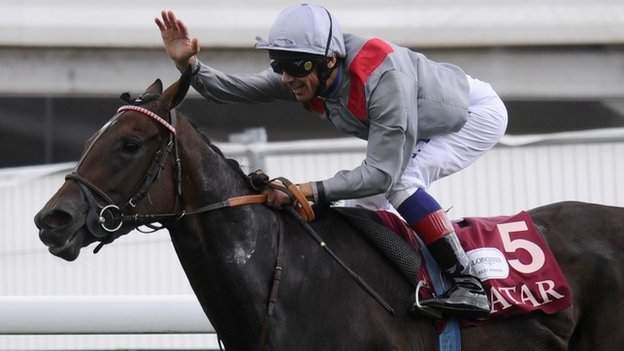 Treve is to stay in training next year with the aim of defending her Prix de l'Arc de Triomphe title at Longchamp.

She was ridden by Thierry Jarnet, although injured Frankie Dettori will be back to partner her next year.

"Sheikh Joaan (Al Thani, owner) bought her to win the Arc and she did it and now we have to try to win it again next year," said the trainer.

No horse has triumphed twice in the Arc, which is Europe's richest race, since Alleged won in 1977 and 1978 for Irish trainer Vincent O'Brien.

"Treve will stay in training next season and I don't think we will run her again this year," said Head-Maarek.

"If she does have one more run, it will be in Hong Kong as the Breeders' Cup is too close and the ground in Japan is always very hard."

Dettori, who is expected to be sidelined for three months with a foot injury, has been signed up as Qatar-based Sheikh Joann's retained rider for another year.

The three-time champion jockey missed the Arc for the first time since 1987 after being thrown from a horse at Nottingham four days before the race. He fractured his right ankle and broke a bone in his foot.