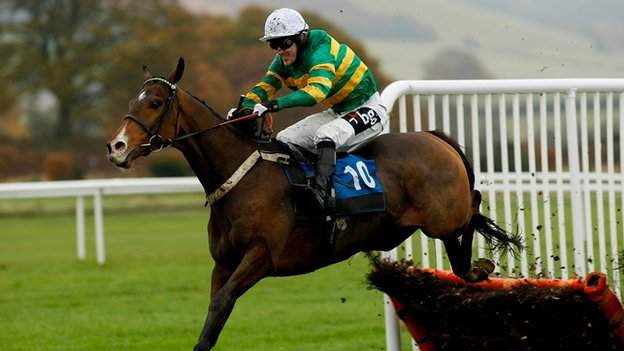 AP McCoy has been called 'amazing' by a leading jockey from the 1970s, Bob Davies, ahead of the Northern Irishman's return to Shropshire.

McCoy will be at one of his favourite tracks, Ludlow, on Wednesday as the track's 2013-14 National Hunt racing programme gets underway.

"He's closing in on 4,000 winners. That is absolutely amazing," said Davies.

"When I was riding back in the 1970s, Stan Mellor was the first to ride 1,000 winners. Obviously, there was less riding in our day but, nevertheless, what AP has done is still incredible," Davies told BBC Radio Shropshire.

"It's not just riding the winners, there's the travelling and everything else.

"In jumping you're always going to pick up injuries and you end up eventually having to stop.

"But he manages his weight well, as he's not a naturally light person. He's actually quite tall.

"If he lived a normal life, he would be not riding at 10 stone 5 or 6 lbs [66kg], I expect it would be more like 12 or 13," added Davies, whose greatest career achievement was winning the Grand National on Lucius in 1978.

Wednesday's racecard at Ludlow is the first of 16 one-day meetings at the busy South Shropshire track over the next eight months.

McCoy, already on course to be crowned champion jockey for a 19th successive year, has four rides on Wednesday's seven-race card, as he looks to add to his 90 winners for the season - and a career tally of 3,845.

He is one of four of this season's five jump jockeys riding at Ludlow, Jason Maguire, Richard Johnson and Sam Twiston-Davies having also made the trip.

"We try to put on better prize money than the majority of the country's smaller courses," adds Davies. "That attracts better horses, better trainers, better jockeys."