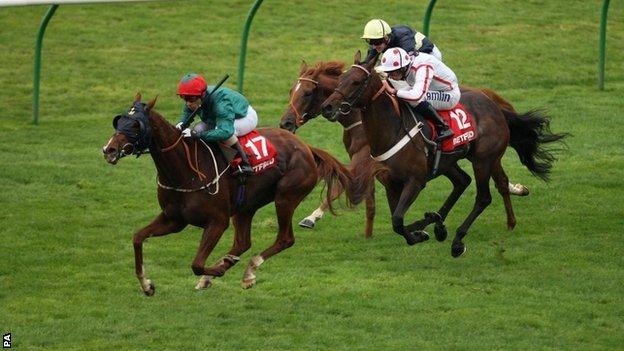 Scatter Dice sprang a 66-1 surprise to win the Cesarewitch Handicap at Newmarket despite being left trailing at the start.

The 10-11 favourite stayed on beat 20-1 outsider Cable Bay by a length and a quarter, with Outstrip in third.

Scatter Dice was the second consecutive 66-1 winner of the Cesarewitch, following Aaim to Prosper a year ago.

But the victory had looked unlikely after a slow start when she lost several lengths to her 32 rivals.

Galvanised by a first-time visor, and expertly ridden by De Sousa, she made up the ground to take the two-and-a-quarter-mile stamina test.

Earlier, Aidan O'Brien celebrated his third triumph in the Dewhurst with War Command following Rock of Gibraltar (2001) and Beethoven (2009).

His son Joseph was capping a week in which he broke the record (117) for the number of winners ridden in an Irish Flat racing season.

He indicated afterwards that his mount idled when hitting the front in the seven-furlong race for juveniles.

Bookmakers rate the son of War Front a 8-1 chance for the 2,000 Guineas over a mile further next year, behind 5-1 favourite Kingman and Australia (7-1).