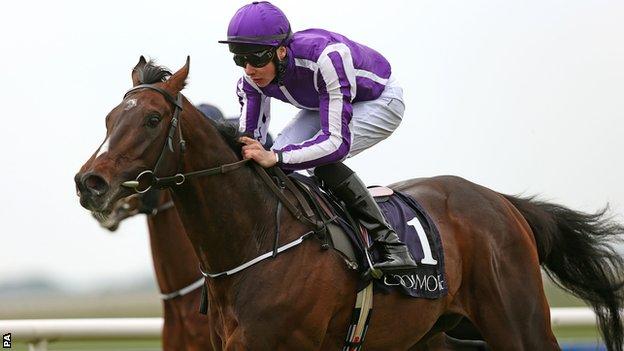 The 2012 Derby winner Camelot, who narrowly missed out on racing's Triple Crown last year, has been retired.

Owners Coolmore Stud said the colt, who also won the 2,000 Guineas before coming second to Encke in the St Leger at Doncaster, will start a breeding career in 2014.

Trainer Aidan O'Brien said: "He was the perfect racehorse, a beautiful horse with a terrific action.

What is the Triple Crown?

"Speed, class and a super-intelligent horse to go with it - he had it all."

The four-year-old would have been the first horse since Nijinksy in 1970 to win the three English Classics in one season and claim the elusive Triple Crown.

Following the St Leger, Camelot finished down the field in the Prix de l'Arc de Triomphe.

He was then struck down with a bad bout of colic and although he returned to win a Group Three race at the Curragh, he finished behind Al Kazeem in the Tattersalls Gold Cup.

A fourth place finish in the Prince of Wales's Stakes at Royal Ascot in June - again behind Al Kazeem - was the son of Montjeu's final outing.

O'Brien added: "Unfortunately we never saw the same brilliance on the racecourse as we had done before his colic operation, but he was showing signs of it at home in recent weeks so it's obviously disappointing that he won't get the opportunity to run again."