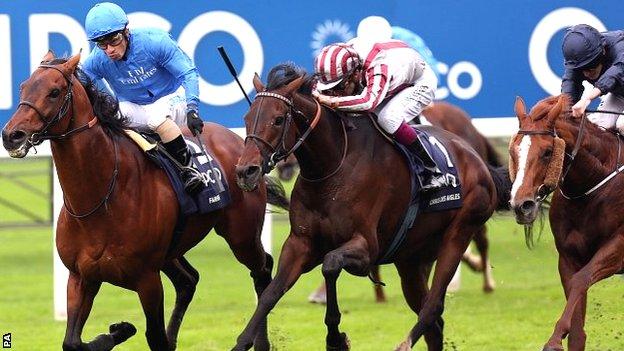 British-trained Farhh concluded Champions Day at Ascot with a thrilling victory in the Champion Stakes.

The injury-plagued five-year-old edged out Cirrus Des Aigles and Ruler Of The World on Britain's richest raceday (£3.4m prize money).

"He travelled like a dream, and like the winner, through the race," said his Brazilian jockey Silvestre de Sousa, who is Godolphin's retained rider.

"I was concerned but he's a marvellous horse and I'm delighted."

Although Farhh won the Group One Lockinge Stakes over a mile at Newbury in May, injury kept him off the track until Saturday.

But he showed impressive stamina and courage to hold off 2011 winner Cirrus Des Aigles by a neck, with another half a length away in third.

"He's a great fighter - every year he has had problems but he's a great horse and I'm so happy," said trainer Saeed Bin Suroor, who confirmed Farhh will now be retired to stud.

Elsewhere, the Queen's filly Estimate never looked like claiming the Long Distance Cup, which was won by a nose by Royal Diamond, who edged out long-time leader Harris Tweed.

Johnny Murtagh rode and trains the 20-1 chance, who struggled in his last outing in the Irish St Leger.

Harris Tweed appeared to have fought off all his rivals with a brave bid from the front, but Murtagh made up late ground to pounce while Eye Of The Storm held on for third, another three-quarters of a length adrift.

Olympic Glory, wearing blinkers for the first time, put in a strong display for an easy win at 11-2 in the Queen Elizabeth II Stakes for jockey Richard Hughes and trainer Richard Hannon.

Top Notch Tonto (14-1) was second ahead of Kingsbarns (14-1) but the faded late on and could only finish fourth.

Murtagh had a chance of claiming a second win but Belle De Crecy was second behind the James Fanshawe-trained Seal of Approval in the Fillies and Mares Stakes.

The 16-1 winner relished the testing conditions under George Baker, who was deputising for the injured Hayley Turner, whose season was finished by a fall from the filly at Doncaster.