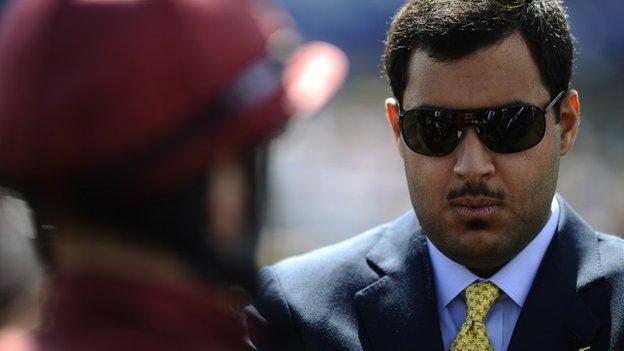 Sheikh Fahad Al Thani, the boss of powerful Qatar Racing, says he would put victory in the Derby at Epsom above winning the Prix de l'Arc de Triomphe.

The Qatar-based sheikh has become an increasingly influential racing figure.

His cousin, Sheikh Joaan Al Thani, paid millions of pounds for Arc winner Treve and a record £5m for a yearling filly.

"I fancy an English Derby before an Arc. We really feel that the best races are in Britain. The Arc is a secondary thing," Sheikh Fahad told BBC 5 live.

Who are Qatar Racing?

The young royal, who is involved in sponsoring Qipco British Champions Day on Saturday, was busy at last week's Tattersalls sales in Newmarket but admitted he had to restrain himself.

"Within our operation, in Qatar Racing and Qatar Bloodstock, value is very important," he said.

"As we are going to be in it for the long-term - it's very easy for us to be buying a horse to win the Derby, for instance. I could easily pay £20m and win the Derby but that's definitely not our strategy."

Sheikh Fahad lost out to John Magnier in what was a European record 3.6m guineas (£3.78m) for a brother to top stallion Galileo and Epsom Oaks runner-up Secret Gesture at Tattersalls.

He said: "If you get too attached to a horse it gets very difficult. For instance, the Galileo colt that went into the ring, we were underbidders at 3.5m.

"We valued him at 2.5 to 3, so we did get a little carried away, which we shouldn't have done. But you learn from your mistakes."

Sheikh Joaan Al Thani, who has employed Frankie Dettori as his stable jockey, paid a world record 5m guineas (£5.25m) at the same sale for a daughter of Galileo.

"Our prerogative is different to my cousin," said Sheikh Fahad.

"I'm sure I would never pay a lot of money for an unproven horse - it has to be worth it. We'll buy at value.

"It's up to him if he wants to, I'm sure he has different ideas for what he's doing."

Referring to the Arc, he said: "Well done to him, he set out to win that race, but what he paid for the horse, I think in our operation we would not have done that, to be buying a filly for that much."