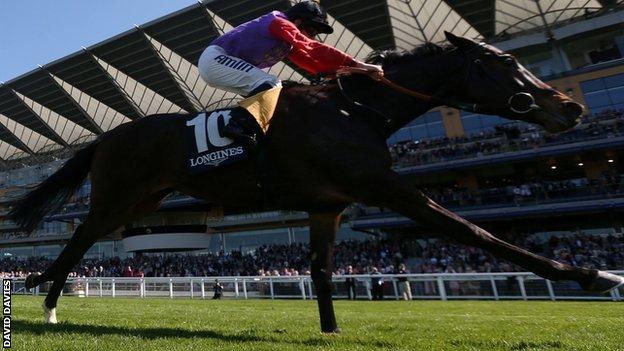 The Queen's filly Estimate is in "wonderful" form ahead of British Champions Day at Ascot on Saturday, says her racing manager John Warren.

The four-year-old, trained in Newmarket by Sir Michael Stoute, is favourite for the Long Distance Cup (13:45 BST).

Estimate won the Gold Cup at Ascot in June - the first victory for a reigning monarch in the race's 207-year history.

"She is moving beautifully and looks wonderful. The trainer couldn't be happier," Warren told BBC Sport.

Estimate has not run since her victory at the Royal meeting and will seek her fourth course victory from four career runs at Ascot, where the ground is likely to be soft.

"She's had a nice long lay-off to freshen her up for this autumn target," added Warren.

Horse: Estimate. A four-year-old filly bred in Ireland by the Aga Khan. Has won four of her seven races. Career earnings: About £280,000

Owner: The Queen, 87, has about 40 horses in training on the Flat and over the jumps

Trainer: Sir Michael Stoute, 67. Has won the Derby at Epsom five times. Arrived in Britain from his native Barbados just before 20th birthday

"She won the Queen's Vase at Royal Ascot on soft ground last year, so we are hoping that won't inconvenience her. It seems to be her track and she relishes the trip."

Rivals in the two-mile contest are likely to include the William Haggas-trained Harris Tweed, winner of the Summer Stakes at Glorious Goodwood in July, and Godolphin's Lonsdale Cup victor Ahzeemah.

Before it was decided to run at Ascot, Warren said the Melbourne Cup on 5 November - in which Gold Cup runner-up Simenon runs - had briefly been discussed as a potential target.

"We did talk about it but I think the Melbourne Cup is probably for horses that are genuinely mile-and-a-half or mile-and-three-quarters horses," he said.

"You need to have a lot of pace and there is hustle and bustle. So it was probably a race we didn't take that seriously."

Estimate's victory at the Berkshire course on Ladies' Day sparked boisterous celebrations among the 70,000 crowd, and the Queen revelled in the victory, with photos of her broad smile beamed around the world.

Warren was alongside her in the Royal Box and admitted he was surprised when watching the race back.

"We didn't realise the cameras were on us, for a start," he said.

"It was made all the more exciting that two furlongs out, even half a furlong out, it wasn't a foregone conclusion. There were lots of things changing and Estimate really buckled down. She's a tenacious filly.

"If we all can't enjoy it and show a little emotion on a day like that, then we shouldn't be doing the crazy thing we all do.

"It was a tremendous day. One we will never forget and I'm sure the Queen will cherish it forever.

"Horses are her life. She was brought up with them and it's one of the great pleasures and relief from all the duties she has. It's a tremendous getaway."

"She's improved every run of her career and we're quite happy with her," he told At The Races.

"Obviously very soft ground would be a bit of an unknown, but hopefully she'll handle it and run a big race."

Whether the filly will race again, or head for a breeding career, will be decided after Saturday's race.

"We will see how she gets on at Ascot and review it afterwards and see what the Queen wants to do," said Warren.

"She's a big breeder so will always be tempted to send a filly off to stud perhaps, although the trainer might have other ideas."