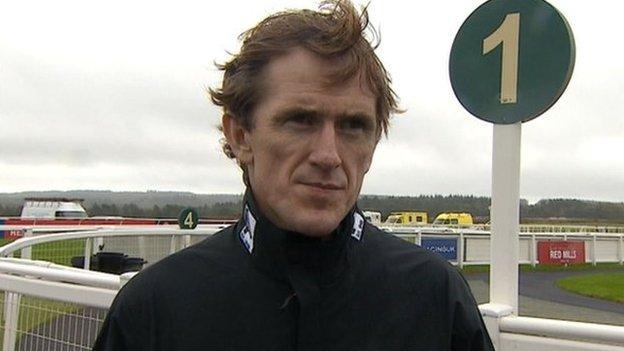 Champion jockey AP McCoy says he will be "forever grateful" to trainer Gordon Edwards for giving him the ride on his first ever winner in Britain.

McCoy rode Chickabiddy to victory at Exeter in 1994, going on to be champion jockey an unprecedented 18 times.

"Your first winner is the most important. I was very lucky that Gordon gave me the ride and she won to get the ball rolling," he told BBC Spotlight.

"The sad thing is it was so long ago - I wouldn't mind another go at it.

"I didn't know Gordon before I rode Chickabiddy and he didn't train that many horses, but the ones he did he was successful with, so I'll be forever grateful to him for giving me the ride."

Edwards explained how McCoy came to be riding for him back in September 1994.

"Mick Fitzgerald was our regular rider but he was injured with a broken collarbone, so [McCoy's agent] Dave Roberts said he had a very good boy just come over from Ireland who was going to ride a winner," said Edwards.

"At the time it was one of the most valuable races they ran at Exeter so it was quite an achievement to win it - and she went on to win again with him about a month later.

"He's ridden a few more winners for me since that and I like to think that I'm a small part in his career.

"We've not used him much in recent years as I just haven't felt we've had horses good enough for him to ride."

Edwards, who still trains horses for both point-to-point and National Hunt racing, added that he felt McCoy is able to get the best out of horses.

"He gives 110% every time - the number of times you hear that a horse wouldn't have won with someone else on its back is unbelievable," he added.

"When you consider how long he's been at it and how much he's put into it, it just shows what he's made of to reach those levels."