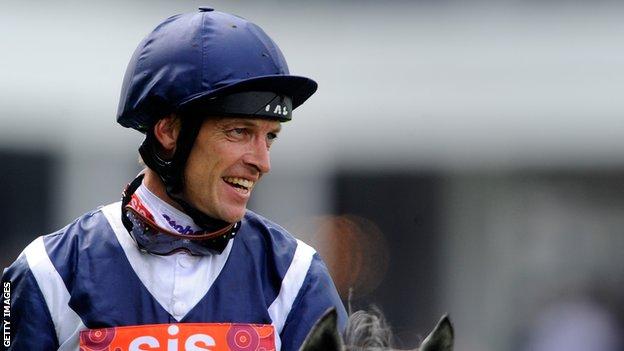 Jockey Richard Hughes claimed his 200th winner of the season by steering Aertex to success at Kempton on Tuesday.

Hughes, 40, reached his first double century by riding the Richard Hannon-trained horse to victory in the Maiden Fillies' Stakes at 8-1.

He is the first jockey since Kieren Fallon in 2003 to ride 200 winners.

Hughes, winner of two British Classic races this year, has a commanding lead over Ryan Moore as he attempts to retain the jockey championship.

The Flat season ends on 9 November.

Hughes is enjoying his most successful season, having secured his first classic winner by guiding Sky Lantern to success in the 1,000 Guineas and then adding a second when on board Talent as he won the Oaks.

He was Flat racing's champion jockey in 2012 having ridden 172 winners - including winning seven out of eight races at Windsor in October at odds of 10,168-1.