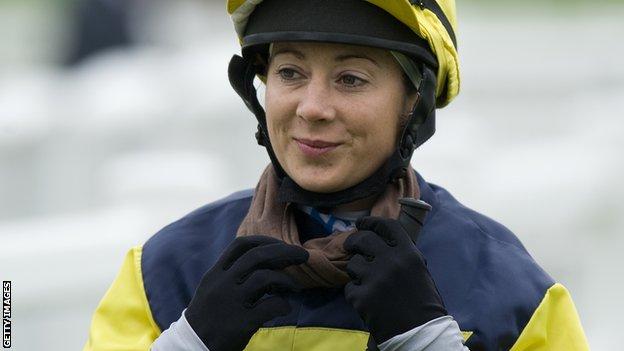 Britain's leading female jockey Hayley Turner says she will return to racing in January as she continues her recovery from injury.

"I will be back next year and I'm looking forward to that. I've got to have eight weeks off," the Newmarket-based jockey told BBC Radio 5 live.

"So I'm going to use December to train, get fit again and hit the ground running in January."

Turner was initially told she had sustained only soft tissue damage after being thrown from Seal of Approval during September's St Leger meeting, and had hoped to return within a few weeks.

But follow-up scans later in the month revealed damage to her pelvis and further assessments showed she had fractured three vertebrae.

Turner, who has twice broken her ankle, in July this year and August 2011, and was knocked unconscious by a fall in March 2009, will focus on returning for all-weather racing in the new year.

"The breaks I've had haven't been painful and if it happened again I wouldn't dread it for that reason," added Turner, the only British female jockey to win a Group One race outright.

"The hardest part is not being able to work. You get in this bubble and it takes over your life. It's very frustrating from getting up at five in the morning going to nothing.

"If anything, the difficult bit is the mental side of it - trying to keep positive."