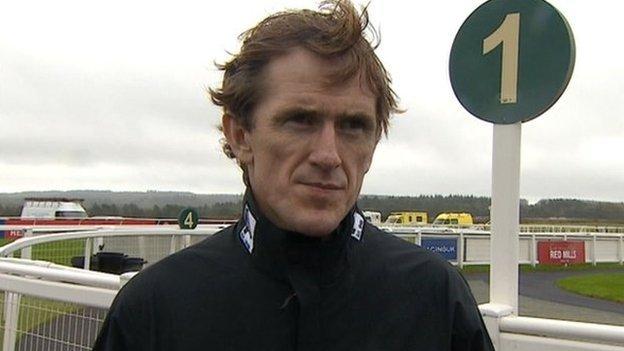 Tony McCoy is just 16 short of the 4,000 winners mark after riding a five-timer at Carlisle on Thursday.

The perennial champion jockey sailed past 100 victories for the season as he took four wins in the green and gold silks of his boss JP McManus.

Three of McCoy's winning horses on Thursday were trained by Jonjo O'Neill at Jackdaws Castle in Gloucestershire.

McCoy has landed 18 jockey's titles since earning his first win for trainer Gordon Edwards in 1994.

The county Antrim man gave O'Neill's Milan Bound a patient ride in the opening Novices' Hurdle at Carlisle to bring up his century for the season, before following up on board Pendra, Upswing, Finding Your Feet and Tutchec.

McCoy's mount, Dubai Sonnet, was the 5-2 favourite for the concluding race but he pulled far too fiercely and finished unplaced.