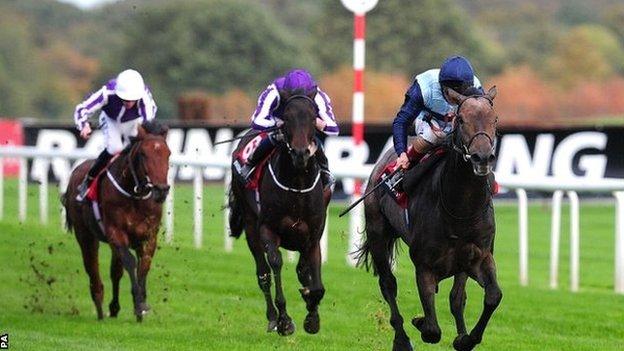 Defying a strong headwind in the final Group One race of the year in Britain, the son of Mastercraftsman was asked to quicken well over a furlong out.

Andrea Atzeni's 7-2 shot surged clear and sealed his third win out of three.

Johann Strauss was second with Johnny Murtagh's Altruistic third, but well-fancied Century was last of the 11.

Chief Barker, unbeaten in three and marshalled by the esteemed Richard Hannon-Richard Hughes combination, could never sustain a serious challenge and weakened in the final furlong before finishing sixth.

Kingston Hill is now tipped for next year's Derby, but Varian said: "We'll have to see how he winters and what he's like in the spring. People have said is he a 10-furlong, mile-and-a-half horse, but he has the pace for a mile and travels so well.

"He has good acceleration and will be in everything. You've got to have an open book with him. We'll have a good eye on the Guineas. Whether he runs before or goes straight there or bypasses the Guineas we'll have to wait and see."