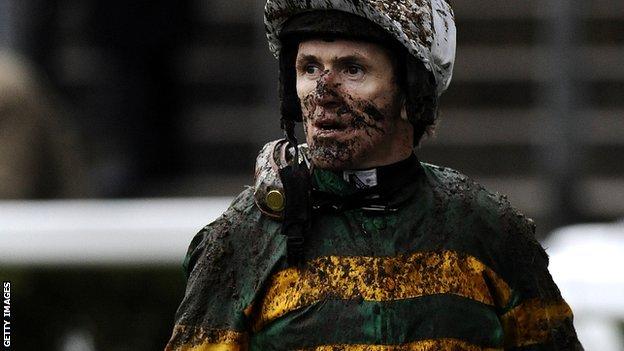 Bangor-on-Dee racecourse was forced to abandon racing on Monday after 20mm of rain overnight.

Eighteen-time champion jockey AP McCoy had been due to have three rides at the Welsh course as he closes in on a landmark 4,000th career win.

The Northern Irishman, 11 wins away from the milestone, is next booked to ride at Ffos Las in Wales on Tuesday.

The day's other meetings at Leicester and Redcar were also abandoned due to waterlogged tracks.

Bangor clerk of the course Andrew Morris said: "We had 20mm of rain overnight. It didn't come as early as originally forecast, but parts of the track are not fit for racing."

McCoy, who has ridden far more winners in jump racing than any other jockey, has been hurtling towards the 4,000 mark, with a five-timer at Carlisle on Thursday followed by a Saturday treble and Sunday double at Aintree.

In football, the Conference South match between Boreham Wood and Maidenhead United was called off after strong winds brought down a large tree in the club's car park.