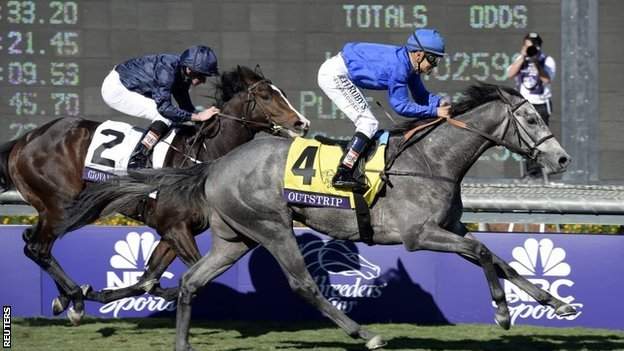 American Mike Smith, 48, rode London Bridge and Outstrip to extend his record as the most successful jockey at the meeting.

The two-day $25m (£16m) 14-race meeting is billed as the world championships of thoroughbred racing.

It climaxes with the Breeders' Cup Classic on Sunday (00:35 GMT) where Irish trainer Aidan O'Brien's Declaration Of War takes on favourite Game On Dude and 2012 winner Fort Larned.

On the opening day in California, London Bridge (9-1) beat Blueskiesandrainbows by a length for Smith's 18th Breeders' Cup win. The veteran soon made it 19 when Outstrip, trained by Charlie Appleby in Newmarket, beat O'Brien's Giovanni Boldini.

But turning for home on Santa Anita's turf track in the one-mile race for two-year-old colts, Outstrip was eight lengths off the lead.

However, Smith found room on the inside and powered past Giovanni Boldini, a brother of Declaration of War, and early pace-setter Bobby's Kitten.

Ryan Moore had just made his move on Giovanni Boldini when Smith brought Outstrip storming through to win by half a length, with Bobby's Kitten third.

Chriselliam, the surprise winner of the Fillies Mile at Newmarket in September, showed that Group One success to be no fluke, travelling smoothly all the way and rocketing clear once Hughes pressed the button.

It was also a maiden Breeders' Cup victory for Hills on a horse part-owned by former champion jockey Willie Carson.

On saturday, O'Brien will bid to win the Classic for the first time after near-misses, including with Giant's Causeway in 2000.

"I think Declaration Of War is different to any of the horses I've run in the Classic, as he has a different profile," said O'Brien.

"We took him to Southwell two weeks ago because that surface is as close to American dirt in terms of the kickback.

"In that work he followed two Group One winners over a mile, sat in behind them and then quickened up to go clear and he was visually very impressive. We did the same before Giant's Causeway went for the Classic but he didn't pull away like this one did."

Saturday's other highlights include the Breeders' Cup Turf (22:22 GMT), where British trainer John Gosden will hope The Fugue - owned by Lord Lloyd-Webber - can follow up her Irish Champion Stakes win.