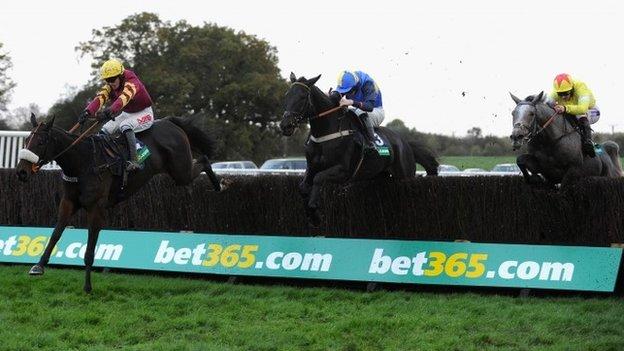 Harry Topper won the Charlie Hall Chase at Wetherby as former Cheltenham Gold Cup winner Long Run was unplaced for the first time in his career.

The 5-1 winner, trained by Kim Bailey, won by a neck from 50-1 outsider Wayward Prince.

The 12-1 chance Roi Du Mee scored a convincing win in the JNwine.com Champion Chase at Down Royal.

Former champion chaser Sizing Europe was a distant second on the rain-softened ground.

At Wetherby, Bailey - who won the Gold Cup with Master Oats in 1995 - was pleased to see Harry Topper produce a run which has him thinking of the big Cheltenham race as a target.

"He's like Master Oats in that he's all guts. He's not easy to train, he's a box walker but he's got guts and Jason [jockey Maguire] knows him well.," said the Gloucestershire trainer.

In his 27th race, 2011 Gold Cup winner Long Run, trained by Nicky Henderson, finished out of the first three for the first time.

The 4-5 favourite was never in contention after making a bad jumping error.

"I think he's probably better than last year, the lads at home say he is, it's just been a case of finding out how to train him," said Nicholls of his 11-4 winner.

The Somerset trainer praised the ride of Twiston-Davies, who deputised for sidelined stable jockey Daryl Jacobs, and added: "He's potentially a top-class jockey."

Another young riding talent, 21-year-old Bryan Cooper, switched to Gordon Elliott's charge Roi Du Mee after his original mount Quito De La Roque was withdrawn at a rain-lashed Down Royal and duly made all the running in the Grade One contest over three miles in front of a 5,900 crowd.

Cooper was able to dictate matters on the eight-year-old and Roi Du Mee steadily pulled well away from his rivals to land the spoils in emphatic fashion from the gallant Sizing Europe, who was finishing second in the race for the third time.

"The more rain that fell the better - the horse jumped great and Bryan gave him a great ride," said Elliott.