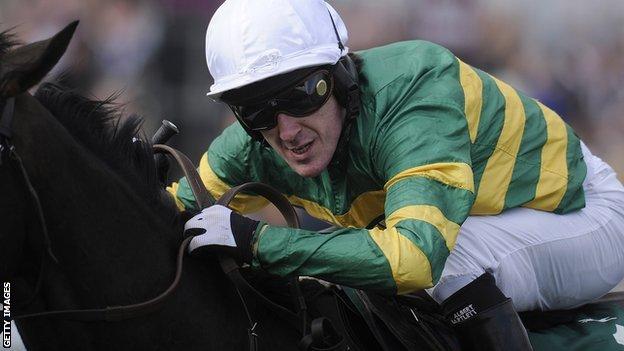 Record-breaking jockey AP McCoy will have to wait until Wednesday to have another chance of reaching the milestone of 4,000 jump racing wins.

The 18-time champion jockey moved on to the 3,998 mark at Kempton on Monday but failed to win any of his three races at Exeter on Tuesday.

McCoy was second on Flemenson before coming in seventh on Keen Eye.

The 39-year-old, who has two booked mounts at Chepstow on Wednesday, was then fifth on Well Hello There.

McCoy has been champion every year since his first season as a professional in 1995-96.

He is the only jump jockey ever to have ridden more than 3,000 winners, with perennial title runner-up Richard Johnson next closest on more than 2,500.

The 18-times champion jockey rode his first winner in England at Exeter on Chickabiddy in September 1994 but was proved right when playing down his chances of getting to the 4,000 mark at the same venue.

Gordon Edwards, who trained McCoy's first-ever winner Chickabiddy, told BBC Radio 5 live: "We'll always remember that day. For me as a small trainer, it was a special moment for us.

"We hadn't met him before the day, but he came highly recommended by his agent Dave Roberts and luckily he was on our horse on that day and did a really good job.

"Mick Fitzgerald would normally have ridden for us, but he was injured a couple of days before. He was always in close contact with Dave and he said a new lad had come over from Ireland and it wouldn't be long before he rode a winner and luckily it was for us."