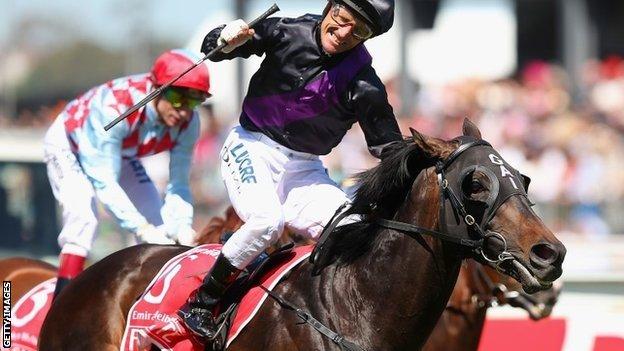 The 6-1 favourite, who was second last year, swooped late under Damien Oliver to beat the 2011 runner-up Red Cadeaux.

Former Dr Who actress Waterhouse is the first female Australian trainer to win the race, while Oliver is back after a 10-month ban for a betting offence.

The Irish-trained Simenon came fourth, while British challenger Dandino was fifth in the two-mile contest, which was watched by a crowd of more than 100,000 at Flemington racecourse.

French challenger Verema - owned by the Aga Khan - was put down after suffering a leg fracture.

In 153 runnings of the contest known as "the race that stops a nation", no British-trained contender has triumphed, although colourful winning trainer Waterhouse, 59, spent several years in England before settling in Australia.

Waterhouse is the daughter of Melbourne Cup-winning trainer TJ Smith and is a former actress, who appeared in Australian TV series Young Doctors and Doctor Who during the 1970s.

"Isn't it nice to have a favourite that can do that? Now I have to do it again, don't I?" said the trainer after her first Melbourne Cup win.

In December of last year, The Queen sent her horse Carlton House - who was third in the 2011 Derby at Epsom - to be trained in Australia by Waterhouse.

Fiorente was ridden patiently by Oliver as Ruscello cut the early pace with Tres Blue, while the Luca Cumani-trained Mount Athos stayed close to the front throughout after overcoming a wide draw.

Red Cadeaux, trained in Newmarket by Ed Dunlop, was beaten by a nose by Dunaden two years ago, and looked set to go one better before Fiorente surged ahead in the closing strides to win by three quarters of a length.

Oliver was securing his third Cup victory following Doriemus in 1995 and Media Puzzle in 2002.

"It was a dream come true. I'm so thrilled," said the jockey, whose win 11 years ago came just days after the death of his brother Jason in a riding accident. The story was turned into a movie called The Cup.

Fiorente was bred in Ireland and spent his early career with British trainer Sir Michael Stoute before transferring to Australia last year.

Owen's runner Brown Panther, who was prominent before fading, suffered a cut leg having been struck by another horse during the race.

"Scan has come back clear. Only superficial gash that requires stitches. We live to fight another day," said former England striker Owen.

There was controversy before the start when stewards looked into raceday treatments given to Dunaden and the Waterhouse-trained Tres Blue.

Dunaden was treated for an ulcer while Tres Blue had treatment for an irritated hoof. The horses were cleared to run but stewards will hold an inquiry later this week to establish whether any rules were breached.