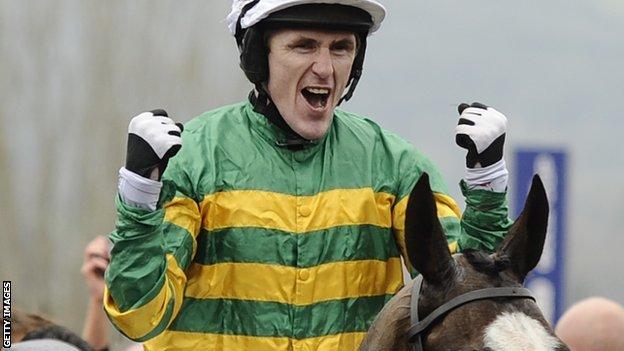 Midweek on bleak winter days at lesser-known sporting venues like Market Rasen and Newton Abbot, a sporting phenomenon has unfolded over the last 20 years.

Cold, sore, tired and underweight, one man has set new landmarks as the mud flies in his face, watched by a hardy band of supporters.

Eighteen-time champion jockey AP McCoy's achievement in reaching an unprecedented milestone of 4,000 jump racing winners is unlikely to be bettered in several lifetimes.

While tennis star Roger Federer was number one in his sport for 237 consecutive weeks, McCoy has been top in his for 937 - and counting.

Those winners have been achieved at a career strike-rate of about 24%, when many of his leading competitors do well to reach 20%.

The 39-year-old has been champion jockey every season since his first as a professional. Eighteen times on the trot since 1996. Mark Morrison topped the charts with Return Of The Mack as McCoy celebrated his first title.

Like all his colleagues, the Northern Irishman risks his life every day in an arena where there are only four blank days in the calendar, and an ambulance follows every race.

He has fallen an estimated 1,000 times from horses weighing half a tonne, travelling at speeds of up to 30mph.

"He is made of concrete - they don't make people like AP McCoy any more," said friend and rival Ruby Walsh in the build-up to McCoy becoming the first jockey to be named BBC Sports Personality of the Year, in 2010.

His will to win is unsurpassed and his spirit is unquenchable.

Teetotal McCoy's toll of injuries is sobering - he's broken both collarbones, shoulder blades, his lower and middle vertebrae, ribs, cheekbones, a leg, ankle, arm and wrist. He has punctured his lungs, chipped teeth and even dislocated his thumb.

And each time he gets up again, driven by his unquenchable thirst for winners and to set landmarks that he will never see beaten.

"He really is an iron man," said Martin Pipe, the retired 15-times champion trainer who employed him as stable jockey for nearly a decade.

"I remember one race early on where the horse slipped up on the bend at Chepstow, AP fell and the whole field galloped over him. He really got flattened.

"I was in the stands and ran down to see where they might have carried him off on the stretcher, and thought through who was going to ride later. We thought our horse Or Royal was a good thing later in the day.

"Lo and behold, two races later, out came AP to ride Or Royal and duly won on it."

Racing is a numbers game - odds, fractions, lengths, furlongs. And McCoy has redefined the mathematics, from novice hurdles at Hexham to the Grand National.

When Stan Mellor rode his 1,000th winner over jumps in 1971, racing fans thought it might never be passed.

McCoy idolised Dunwoody as a child, but was just 28 when he passed his tally, seven years younger than his fellow Northern Irishman whose career was ended by injury at the age of 35.

That was in 2002, the year he achieved perhaps his most staggering achievement - breaking the all-time record set by Sir Gordon Richards by racking up 289 victories in one season.

That season he rode 189 winners just for Pipe. When Dunwoody won his last title in 1995, his tally for all trainers was 160.

Richards was champion jockey 26 years running, and his record stood for 55 years. He rode on the flat, whereas McCoy has stretched his body and the pain barrier to achieve more success.

Winners are what drives him, and fear - the fear of not being champion or losing his records.

"He certainly does encourage the horses to run for him. They understand him, he gets them in the right place at the right time, presents them correctly at a fence and goes at the right pace.

"He is totally dedicated to racing, watches all the replays, enjoys it immensely and is always trying to win, whether it's in a small race or a big race, he gives every horse a Gold Cup ride."

McCoy is tall for a jockey, at just over 5ft 10in, and has a punishing schedule of hot baths, saunas and precious little food as he keeps his weight down to about 10st 3lb. His natural weight would be 12st.

The arrival of two children - daughter Eve, now six, and three-month-old Archie - coupled with the measured, intelligent support of wife Chanelle have mellowed him a little.

But his sporting mantra still holds true: "I don't see the point of doing anything if you can't win."

When asked several years ago if he enjoyed the atmosphere at the showpiece Cheltenham Festival, where 200,000 racegoers carouse throughout the week, McCoy replied: "I'm going to Cheltenham to ride winners, not run a social club."

To ensure he made the festival in 2008, the jockey underwent kriotherapy treatment in an icy chamber to help his injuries heal. The temperature was set to -135C. McCoy asked for it to go lower and he shivered for three minutes at another record -149C.

Next most successful jump jockeys (British and Irish)

Even with more summer jump racing, and an increase in fixtures, McCoy's statistics send a chill through his rivals. No other jump jockey has ever ridden more than 3,000 winners, never mind 4,000.

Richard Johnson, the man who has finished runner-up in the title race 15 times, is closest, with nearly 2,600 - but he bears no ill-feeling towards the man who keeps denying him the championship and the pair share a mutual respect.

"AP has brought racing forward for jockeys - his fitness, determination and attitude is second to none," said Johnson, 36. "He's a credit to himself, but he's a great role model for the sport."

McCoy's next birthday is in May. He will be 40 - a crossroads age for injury-prone jump jockeys.

While he has media interests and a burgeoning career as a novelist - his first racing tale, Taking The Fall, featuring fictional jockey Duncan Claymore, came out on Thursday - it is the day when he stops and loses that winning thrill which may yet prove to be his toughest hurdle.

"It's what I've always lived for and gives me the greatest high," McCoy said of the sport he adores.

The rider, whose biggest drinking vice is six or seven sugars in a cup of tea on a busy racing afternoon, added: "I've never taken drink or drugs in my life, and don't know what it does for most people - but this is the nearest thing I've had to a drug.

"Nothing has ever given me more satisfaction. I'm a realist, but it is the worst thing trying to contemplate not riding. It is an unbearable thought."