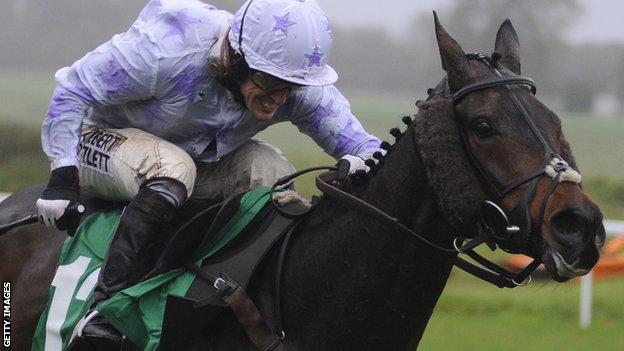 AP McCoy has one ride left at Towcester on Thursday as he attempts to claim the 4,000th victory of his career.

The 18-time champion reached 3,999 wins on Wednesday thanks to a late spare ride on Minella For Steak at Chepstow.

"While 4,000 sounds colossal, it really is - nearly 1,500 successes more than any other rider over jumps. Once upon a time to get to 'a mere' 1,000 was considered something very special.

"To an extent, as there's no question of him getting to the milestone and then abruptly retiring, this is just a number, but when you get to such a landmark, whether it be in sport or business or marriage, it's a good time to celebrate.

"I dare say McCoy himself would like to just get on with riding minus any hype, but racing is understandably keen to shout about one of its own who is unquestionably one of Britain's most extraordinary sportspeople.

"Nearly 4,000 winners and 18 champion jockey titles over nearly two decades in - and this is crucial - the most perilous of sports where you 'play' not only with animals, but are followed around by an ambulance, is indeed a colossal achievement."

But he was unable to reach the unprecedented landmark in his first race and finished fifth on Church Field in the 14:10 GMT handicap hurdle.

He has one more chance to make history on Thursday riding novice hurdler Mountain Tunes at 15:10 GMT.

Northern Irishman McCoy moved to within one of the landmark with the Jonjo O'Neill-trained hurdler after original mount Mission Complete was declared a non-runner.

Towcester offered free admission to racegoers in the hope of a bumper crowd with the possibility of sporting history being made.

O'Neill said: "Mountain Tunes, it's his first run for us and we're not quite sure whether he will like the ground or not, but he's in good form.

"He (McCoy) is still so hungry for the sport and wants all the winners he can possibly get which is fantastic. He's riding better than ever at the moment so hopefully he can go on for another 10 years."

McCoy has said he would ideally like to ride his 4,000th winner in the green and gold silks of millionaire racehorse owner JP McManus, for whom he is the retained rider.

Towcester clerk of the course Robert Bellamy said officials at the track were "delighted" when he moved within one of the landmark ahead of Thursday's meeting.

McCoy has been crowned champion every year since his first season as a professional in 1995-96 and is the only jockey to have ridden more than 3,000 winners. The next closest is Richard Johnson on 2,551.

At Chepstow on Wednesday, McCoy missed out on victory with his other ride - finishing fifth on El Macca in the opening race.

"We're all supposed to be experts in this game and if anyone was riding him, or had anything to do with him, you wouldn't believe he could win on this ground."

Doubles on three consecutive days took him to 3,998 wins following Monday's meeting at Kempton - but he drew a blank from three rides at Exeter on Tuesday.