AP McCoy became the first jump jockey to ride 4,000 winners when he triumphed with the second of two rides at Towcester on Thursday.

The 18-time champion reached the unprecedented milestone on Mountain Tunes in the 15:10 GMT race.

"It was just amazing, it couldn't have worked out any better," said McCoy, 39. "Racing people are fantastic, they are so pleased for me."

Next most successful jump jockeys (British and Irish)

McCoy was fifth on Church Fields in the earlier 14:10 GMT handicap hurdle.

He was particularly delighted to have secured the victory on a horse trained by Jonjo O'Neill and owned by JP McManus, both long-time friends in the racing industry.

"To do it for Jonjo and the McManus's is brilliant as they've been so good to me," he said. "It was always, hopefully, going to be in JP's colours.

"I've had the same agent, Dave Roberts, from day one and his Dad sadly passed away yesterday so I'd like to dedicate this to him.

"To have Chanelle (wife), Eve and Archie (children) here is great, and to do it in the McManus silks means a lot - Eve thinks they belong to me!"

McManus immediately embraced McCoy when he dismounted and said: "What a man and what a ride. I think he was more pleased because when he came in he said it was a nice horse!

"That ride sums him up. I remember when he first came to the UK. Christy Roche brought him to my attention and he said 'you know this AP, he's getting 7lb and he should be giving weight away'. 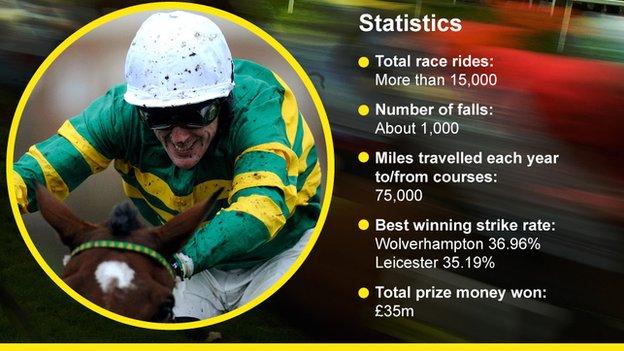 "Little did we think that day that he'd ride 4,000 winners but full marks to him, he's dedicated to the game and he's a pleasure to have around, every day you deal with him is a joy."

McManus, who like many in racing was hit very hard earlier this year when jockey JT McNamara was hurt in a fall at Cheltenham that left him paralysed, added: "I think racing is a close-knit community, as evidenced by recent events, and AP is behind everything that is good.

"I'm so proud and pleased that I know him and his family, long may he carry on. It was nice that he wanted it to be in my colours, I'm choked that he did."

Rod Street, chief executive of Great British Racing, paid tribute to McCoy after his historic triumph and claimed he belonged in "sport's pantheon of greats".

"What has been so striking has been the continued enthusiasm with which Tony McCoy goes about his business. That he loves it and that he's still more than capable of beating all the young pretenders thrown at him should ensure he goes on for a bit yet. But for how long?

His ex-boss and close friend Martin Pipe sent out a total of 4,182 winners prior to retirement in 2006. That total is likely to be the next target and he could reach it during the 2014/15 jumps season.

"After all he's achieved in racing, AP was already a legend and this latest incredible achievement just confirms his position amongst sport's pantheon of greats," he said.

"If you were going to imagine the perfect ambassador for the sport, you would, only in your wildest dreams, dare to come up with AP - a man whose incredible talent is matched only by his unrelenting will to win and his phenomenal mental and physical toughness.

"He is the ultimate sportsman but also just an incredibly nice, funny and modest bloke.

"As a sport, we are incredibly lucky to have him."

McCoy's 3,999th win came at Chepstow on Wednesday after switching to Jonjo O'Neill's-trained Minella For Steak when original ride Mission Complete was declared a non-runner.