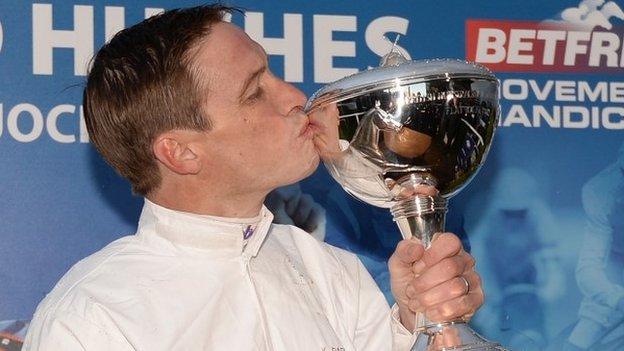 "My ambition from day one has been to win a Derby. I've haven't had enough rides in it to win it yet," he said.

Many of his winners have been provided by Richard Hannon, who is set to hand over training duties to his son Richard junior.

In a highly successful season, Hughes became the first rider since Kieren Fallon in 2003 to notch up 200 winners in a season, comfortably holding off the title challenge of Ryan Moore.

The rider was accompanied by his son and daughter, Harvey and Phoebe, to the podium at Doncaster to receive his trophy, after which the champagne flowed and he was hoisted on the shoulders of his weighing-room colleagues.

Hughes, who also had his wife Lizzie in attendance, said: "It's a fabulous day and this is why you do it. I wanted to show last year wasn't a fluke.

"I went hard early in the year and got my quickest 50 and 100. I thought if I could ride 200 winners, that would nearly clinch it and I did.

"I've been on some wonderful horses and I'm under no illusions I wouldn't be champion jockey without the Richard Hannon stable behind me.

"This is my busiest time of the year. I'm off to South African, Japan, India and Hong Kong. I shall then have three weeks with the family in Barbados and be back in February."

The day's feature race, the November Handicap, was won by 8-1 chance Conduct, ridden by Seb Sanders for trainer William Haggas.

Hannon claimed his fifth trainers' title while Jason Hart was named champion apprentice in a field which includes promising youngsters such as Thomas Brown and Oisin Murphy.

The champion owners' accolade went to Godolphin for a ninth time despite a season which saw 22 of its horses suspended after a doping scandal.

Racing manager Simon Crisford told the Godolphin website: "We are delighted to be British champion owner again and it has been a fantastic team effort by the whole operation.

"This is a great achievement for everyone involved and we are looking forward to defending our title next year."