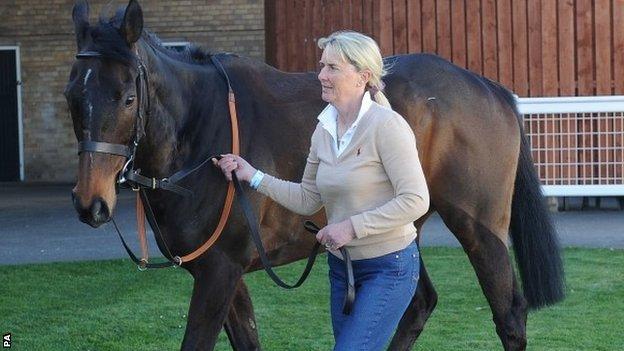 Grand National-winning trainer Sue Smith has been fined £3,000 by the stewards at Southwell over the running and riding of hurdler Emral Silk.

Conditional jockey Jonathan England was suspended for 18 days and the horse banned from running for 40 days.

The wife of former top showjumper Harvey Smith, based in Bingley, West Yorkshire, was the third woman to train a National winner after Jenny Pitman (Corbiere 1983, Royal Athlete 1995) and Venetia Williams (Mon Mome 2009).

Emral Silk (12-1) finished seventh of eight behind winner John Reel, beaten a total of 42 lengths on his hurdles debut.

"They have been found in breach of schooling and conditioning in public," said Sidebottom.

England's ban runs from 25 November to 12 December. It was his second offence within 12 to 24 months. Emral Silk is prohibited from competing in a race from 14 November to 24 December.