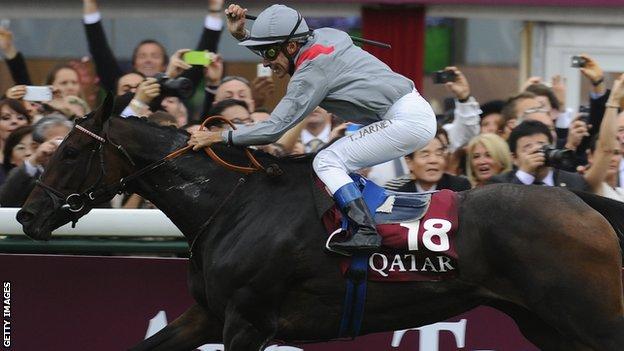 Unbeaten Treve has been named racehorse of the year at the Cartier Racing Awards.

The three-year-old French filly, trained by Criquette Head-Maarek, has won all five of her starts.

She ended this season with an impressive five-length victory in the Prix de l'Arc de Triomphe.

The success saw Treve emulate Zarkava in 2008 by winning the French Oaks, Prix Vermeille and Arc in the same season.

Horse of the year - past winners

Magician, winner of the Irish 2,000 Guineas in May and the 12-furlong Grade One Breeders' Cup Turf last month, won the Three-Year-Old Colt award.

The Queen's four-year-old filly Estimate, who won the Gold Cup at Royal Ascot, took the honour in the Stayer category.

The award of merit went to Jim Bolger, whose career began in the 1970s and has encompassed success as a trainer, owner and breeder.

The awards are determined by points earned by horses in Pattern (top-class) races throughout 2013, combined with the opinions of a panel of racing journalists and votes from readers of the Racing Post and the Daily Telegraph plus Channel 4 viewers.