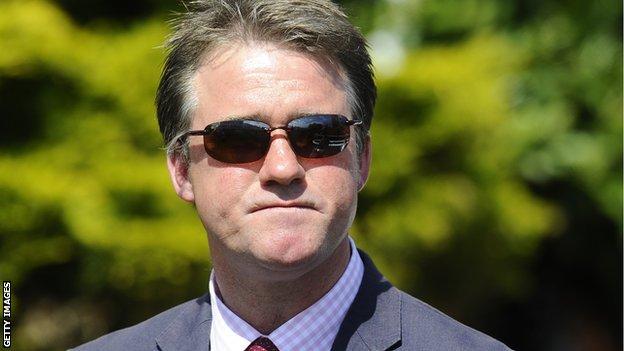 Trainer Gerard Butler faces a wait to learn his fate after an inquiry into nine horses testing positive for a banned anabolic steroid in February.

He faces seven charges, including conduct prejudicial to the sport.

A British Horseracing Authority panel has considered the evidence and adjourned a decision to a later date.

It is thought the disciplinary panel is most likely to deliver its verdict next week, although the exact date is not yet known.

The result and reasons, plus any penalties if applicable, will be published at the same time.

Irishman Butler could face a penalty from a fine to a 10-year ban if found guilty.

The BHA announced earlier in the year that nine other unnamed trainers who used Sungate will not face any charges after concluding they used the product on veterinary advice and should not be punished in the absence of positive tests.

Other charges faced by Newmarket-based Butler include injecting the horses himself despite not being a qualified or registered veterinary surgeon, and failing to keep a record of treatments.

His hearing was listed for three days, but had concluded by Tuesday afternoon having started on Monday morning.

The Irishman, whose big wins include the 1999 Eclipse Stakes at Sandown with Compton Admiral, said his medical records were approved by the BHA.

After a visit by inspectors in February, nine horses trained by him tested positive for the prohibited steroid stanozolol, contained in the Sungate treatment.

The BHA says 43 horses from nine trainers were identified as having been treated with the product by vets since early 2010.