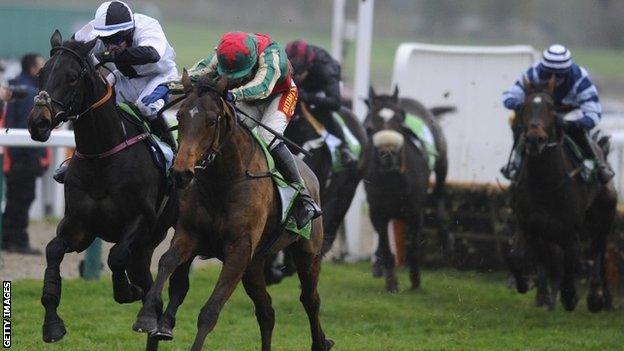 Trainer David Pipe recorded a 5,995-1 Cheltenham four-timer, headed by Dell' Arca in the feature Greatwood Hurdle, on the final day of the Open meeting.

The horse won in the famous blue and green colours of late owner David Johnson, who enjoyed much success with Pipe and his father Martin, and who had a race named in his memory on Friday

"It puts the icing on the cake," said the delighted trainer. "This meeting means a lot to Pond House, the Pipe family, and DJ made it his meeting in the past. It's fantastic - these days don't happen very often in racing.

"I'll never come across a man like him [Johnson]. He instilled confidence in me. No matter how much money he would have had on, he never put me under any pressure."

Dell'Arca had shown promise in three hurdling starts in France and was bought by owner Professor Caroline Tisdall for 280,000 euros (£234,500).

"He's still a novice and he's only won a handicap off a mark of 128 so we will enjoy today. I'm sure he'll get entries in all the big handicaps," said Pipe.