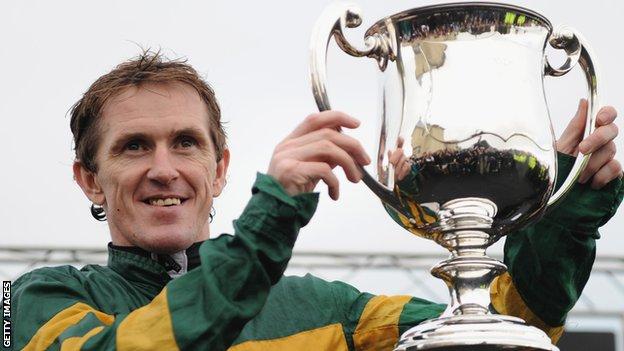 AP McCoy will be 40 in May but shows no sign of slowing down, and the big question about the 18-time champion jump jockey in 2014 is how much closer to 5,000 career winners he'll travel.

Certainly the famous day at Towcester when he and Mountain Tunes - a name to keep handy for sporting pub quizzes, I've found - reached 4,000 has already been left well behind.

As for up-and-coming stars, the profile of Irish jockey Bryan Cooper, 21, is sure to climb after being appointed first-choice jockey by aviation boss Michael O'Leary's Gigginstown Stud.

The ever-growing investment in British racing by the ruling family of Qatar, the Al Thanis, is certainly not stopping, and will be increasing in 2014.

Sheikh Joaan Al Thani, a cousin of the higher-profile Sheikh Fahad, is gaining a reputation as a big spender, and included in his burgeoning empire is a filly for whom he paid a record 5m guineas (£5.25m) as a yearling at Tattersalls Sale, Newmarket in October.

Frankie Dettori, due back in the saddle after injury forced him to miss the winning Prix de l'Arc de Triomphe ride on the Sheikh's filly Treve - who races on, with a Longchamp repeat her target - is the owner's number one jockey.

Kingston Hill ended his unbeaten two-year-old career with an impressive Group One success in the Racing Post Trophy at Doncaster, and is the horse to follow into Flat racing's Classic races.

It's likely the colt, owned by Paul Smith, son of Coolmore partner Derrick, will first be aimed by trainer Roger Varian - for whom 2014 will be only his fourth season - at the mile-long 2000 Guineas in May.

However, it could be that the longer challenge of the Epsom Derby in June will be ideal for Kingston Hill. Wherever he goes, there will be plenty of Coolmore opposition, and therefore father-son rivalry.

Four winners, including in the feature race, on Scottish racing's Ayr Gold Cup day in September 2013 for jockey Oisin Murphy signalled the arrival onto the big stage of a special new talent.

Similar form on such a competitive day would have been striking had it come from champions Richard Hughes or Ryan Moore, but here was an 18-year-old apprentice doing the business.

With a mentor like Paul Nicholls, it was highly likely that the former champion trainer's one-time right-hand man Dan Skelton would hit the ground running when setting up on his own.

And that's exactly what has happened. The 28-year-old, son of Olympic gold medal-winning showjumper Nick, now has a string of around 40 horses based near Alcester, Warwickshire.

Willow's Saviour, ridden by jockey brother Harry, provided the biggest win to date before Christmas, and there are sure to be plenty more where that came from. The horse is being aimed at the Betfair Hurdle at Newbury in February.

Running up a long sequence of wins is quite a feat, whatever the level, and Annie Power, a mare trained in Ireland by Willie Mullins, looks destined for the top after making it nine from nine at Cheltenham on New Year's Day.

Ruby Walsh rode the six-year-old, who ticked pretty much every box as she swept aside the useful Zarkandar (again) as well as atrocious weather and ground conditions.

It is unclear which of the Champion, World or OLBG Mares Hurdle at the Cheltenham Festival she will be aimed at, but it's probably worth remembering that the Mullins team already has Champion Hurdler Hurricane Fly and OLBG winner Quevega defending their titles.

More horses will be dope tested than ever before in the months ahead as the British Horseracing Authority battles to put behind it the two embarrassing drugs scandals that hit the sport in 2013.

In response to the unearthing of outlawed anabolic steroid use in Newmarket, at Sheikh Mohammed's Godolphin stable and by trainer Gerard Butler, the BHA announced a new "robust strategy".

A successful assault on the Grand National in April by Monbeg Dude would be one of the great stories of the year - and it looks a realistic proposition.

This is the horse, trained by Michael Scudamore, that was bought by rugby star Mike Tindall, husband of the Queen's grand-daughter Zara Phillips, during a boozy dinner at sales-ring in Cheltenham.

Co-owned by Tindall with rugby players James Simpson-Daniel and Nicky Robinson, Monbeg Dude, winner of last season's Welsh Grand National, has undergone intensive training with Phillips to improve his jumping, and now seems better than ever.