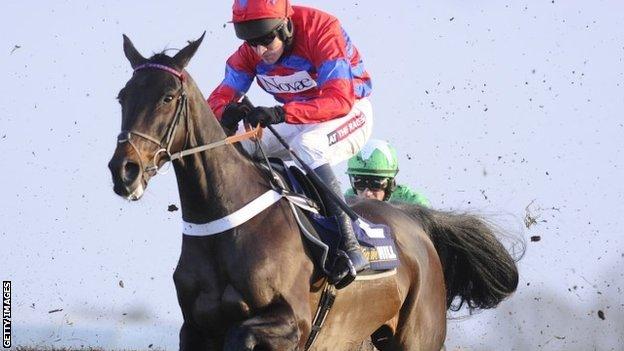 Sprinter Sacre heads 26 entries for the Queen Mother Champion Chase at the Cheltenham Festival on 12 March.

The Nicky Henderson-trained horse, previously unbeaten in 10 races over fences, pulled up in the Desert Orchid Chase at Kempton last month.

He had an irregular heartbeat which has since stabilised and successfully came through a gallop last week.

Despite recent events, Sprinter Sacre, who is the highest-rated horse in jump racing since the 1960s, remains favourite to defend the title.

Sire De Grugy, a leading two-mile chaser with three wins from four starts, is entered along with Sizing Europe, who won the 2011 event.

Paul Nicholls' top-class novices Dodging Bullets and Hinterland are potential contenders alongside Al Ferof, who was third in the King George, and has the Ryanair and Gold Cup as potential targets.