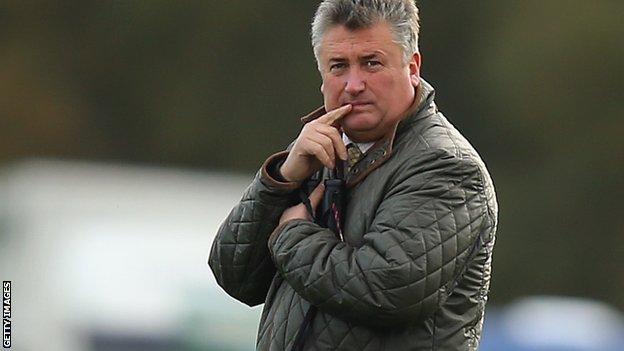 Trainer Paul Nicholls says there has been no fall-out with his main jockey Daryl Jacob despite Sam Twiston-Davies being given the ride on record-breaking hurdler Big Buck's.

Big Buck's is set to return in the Cleeve Hurdle at Cheltenham on 25 January after a year out with injury.

"Daryl has never given me the impression that he was mad keen to ride Big Buck's," said Nicholls.

"If he had, then he could have been on the horse. End of story."

Big Buck's, who has won 18 consecutive races, is favourite to win a record fifth World Hurdle at the Cheltenham Festival in March.

Both Walsh and 18-time champion jockey AP McCoy are not free to ride Big Buck's on his comeback run.

Owner Andy Stewart has other World Hurdle contenders in Celestial Halo, Saphir Du Rheu and Salubrious, while Jacob could yet ride stablemate Zarkandar.

Nicholls said Jacob wanted to focus on the stable's younger horses and felt riding Big Buck's would be "something of a poisoned chalice" - with little credit if he won, and potential criticism if he lost.

"There has been no falling out - Daryl will continue to ride for Andy and has the confidence of all our owners - it is just simply that a decision had to be made. And we made it," added Nicholls in his Betfair column.