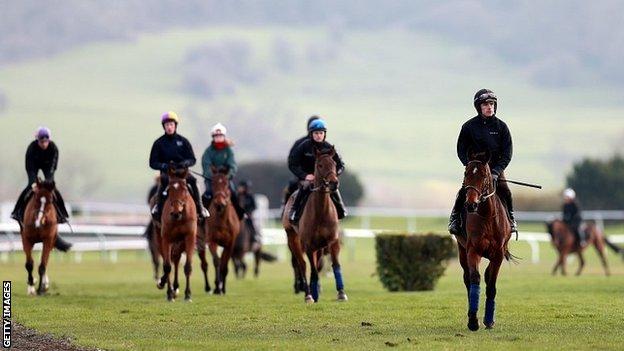 Jump racing's showpiece Cheltenham Festival starts on Tuesday with more than 230,000 racegoers expected to revel in the four-day meeting.

Hurricane Fly, trained by Willie Mullins, will bid to emulate his great Irish compatriot Istabraq by winning the Champion Hurdle for the third time.

Opponents include talented younger hurdlers such as The New One, Our Conor and My Tent Or Yours.

Punters are expected to wager £250 million during the week.

The crowd's "Cheltenham Roar" will greet the opening race, the Supreme Novices' Hurdle at 13:30 GMT.

The festival's leading all-time jockey Ruby Walsh rides Hurricane Fly (15:20) and a string of other well-fancied mounts, including Quevega who will bid to win the Mares' Hurdle for a record sixth time on Tuesday (16:00).

"Hurricane Fly has been here and done it twice before and if we are being cynical about it, the others have got something to prove in a Champion Hurdle whereas he hasn't," said Walsh.

"The Festival is just different to any other meeting. I don't know if it's the crowd, the atmosphere or the expectation, but there is something magical about Cheltenham."

Hundreds of horses will run in a total of 27 races, with the weather set fair for a week of pulsating action at the picturesque Gloucestershire track.

Going at the drying Prestbury Park course is officially described as good to soft, good in places ahead of Tuesday's action.

Despite the wettest winter on record, watering at the quickly-draining track later in the week has not been ruled out as officials look to ensure safe jumping ground.

10,745 - Bottles of house Champagne sold at The Festival

8,000 - The number of sticky toffee puddings eaten during the fixture

Coverage of the build-up has been clouded by a drugs controversy surrounding the Irish trainer Philip Fenton, whose three intended runners include Last Instalment, third favourite for Friday's blue riband event, the Cheltenham Gold Cup.

It emerged last month that Fenton, who also has Dunguib in the Coral Cup and Champion Bumper contender Value At Risk, faces charges of possessing banned substances, including anabolic steroids following an Irish Department of Agriculture inspection of his Tipperary stables in January 2012.

In an unprecedented move, the British Horseracing Authority carried out dope tests on his Cheltenham runners, which returned clear, and they are free to run.

While judgement is yet to be passed on Fenton, who is expected to deny wrongdoing, his Irish compatriots are keenly awaiting the annual battle against their British rivals.

Irish-trained horses gained the upper hand overall for the first time at last year's meeting, outscoring home hopes by 14 to 13.

The tussle has been formalised for 2014 with the inaugural Prestbury Cup being awarded to the side which secures the most victories.

Hurricane Fly is a leading Irish hope in Tuesday's feature race, the Stan James Champion Hurdle, where he seeks to extend his world record of career Grade One wins to 20.

Last year's Triumph Hurdle winner Our Conor, also trained in Ireland by Dessie Hughes, is half his age while another 2013 Festival scorer, The New One is aged six.

Day in a sentence: Months of anticipation released in 'Cheltenham Roar' ahead of opening race while Hurricane Fly and Quevega seek landmark victories.

This time last year: Racing was delayed as snow threatened the fixture, with temperatures feeling like -11C with wind chill factor.

Leading trainer: Nicky Henderson, based in Lambourn, Berkshire, has clocked up 50 victories.

The New One would be a popular local winner, with 21-year-old jockey Sam Twiston-Davies riding for his trainer father Nigel, whose stables are about 15 miles from the racecourse.

My Tent Or Yours, the mount of 18-time champion jockey AP McCoy, runs for trainer Nicky Henderson, who is seeking a record sixth win in the race with the horse who has overcome a recent injury scare.

But they all have to beat Hurricane Fly, who won his maiden Champion Hurdle in 2011 under regular jockey Walsh and beat 2012 winner Rock on Ruby last year to become the first horse since Comedy Of Errors 38 years earlier to regain the title.

Victory in the contest, run over two miles and 110 yards on the four-day Festival's opening day, would make him only the sixth three-time winner of hurdling's premier event, and the first since Istabraq in 2000.

Other highlights during the week include the Queen Mother Champion Chase on Wednesday, for which Sire De Grugy is favourite in the absence of racing's top-rated steeplechaser Sprinter Sacre.

Big Buck's will seek another record on Thursday when he goes for a fifth World Hurdle win for Somerset trainer Paul Nicholls, but faces unbeaten mare Annie Power, who represents the powerful Mullins and Walsh combination.

The meeting builds up to the Gold Cup on Friday, 50 years on from the first of three triumphs in the race for legendary Irish steeplechaser Arkle.

Henderson will hope Bobs Worth can retain the title this year, while Nicholls saddle second favourite Silviniaco Conti,

Racecourse chief Ian Renton said: "We're looking forward to a great four days of racing and the weather will certainly play a part in that."