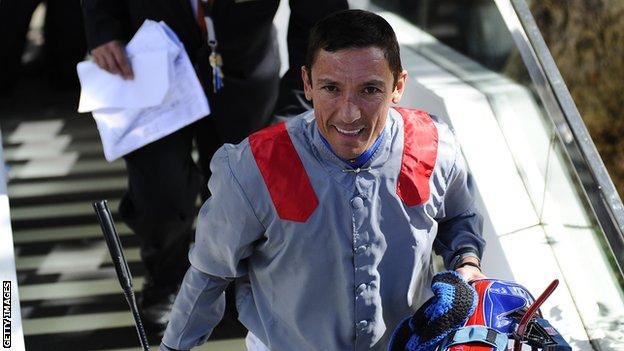 Frankie Dettori will return to action with three rides at Lingfield on Wednesday.

The three-time champion jockey has been sidelined since 2 October, when he fractured an ankle in a fall at Nottingham.

The Italian will make his comeback on Eco Warrior in the coral.co.uk Median Auction Maiden Stakes.

"He's looking forward to getting back and has been riding out," said Ray Cochrane, Dettori's agent.

Four-year-old gelding Eco Warrior, who is rated 57, has failed to hit the mark in four starts to date, most recently finishing 10th of 11 runners at Wolverhampton.

Dettori, 43, will also ride the Jeremy Noseda-trained Gone With The Wind in the 32Red.com Maiden Stakes over six furlongs on the Polytrack.

The Dutch Art colt, who is owned by Paul and Susan Roy, will make just his second career start after a fifth-place finish at Kempton in November.

The seven-year-old will be reverting to the Flat for a fast-track qualifier for the all-weather finals day at Lingfield on Good Friday.

The rides come the day before Dettori flies out for the Dubai Racing Carnival at Meydan.

He will be in Dubai to partner Mshawish as the retained rider to Sheikh Joaan Al Thani, owner of Prix de l'Arc de Triomphe winner Treve.

Dettori sustained his ankle injury four days before he was due to ride Treve in Europe's premier middle-distance race at Longchamp.

His return comes on the same day, one year on, from his eviction from Celebrity Big Brother.

Dettori took part in the Channel Five reality show while he was serving a six-month ban after testing positive for cocaine.