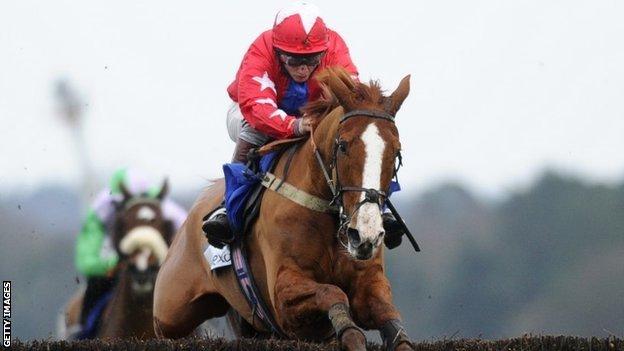 Sire De Grugy continued his improvement this season by landing another big race win in the Clarence House Chase at Ascot.

The Gary Moore-trained eight-year-old, ridden by Moore's son Jamie, moved up to challenge with three fences to go.

It follows his wins in the Tingle Creek Chase at Sandown and the Desert Orchid Chase at Kempton.

He remains second favourite for the Queen Mother Champion Chase at the Cheltenham Festival in March, behind Sprinter Sacre, who was pulled up behind him at Kempton last time with an irregular heartbeat that has since corrected itself.

But Jamie Moore believes his horse's impressive performance at Ascot, which means he is the top earner in jump racing this season, puts him in a strong position for the Festival.

"This is all about the horse - some of the jumps he put in were spectacular," he said. "He was magic today, all the credit to the horse. Today he felt as good as he has ever felt.

"Sprinter Sacre is a great horse, but today was his most impressive performance. I'm not saying he'll beat the other horse [Sprinter Sacre], but he could do."

Somersby, who might have given former trainer Henrietta Knight an emotional victory following the recent death of her husband Terry Biddlecombe, unseated jockey Dominic Elsworth early on.